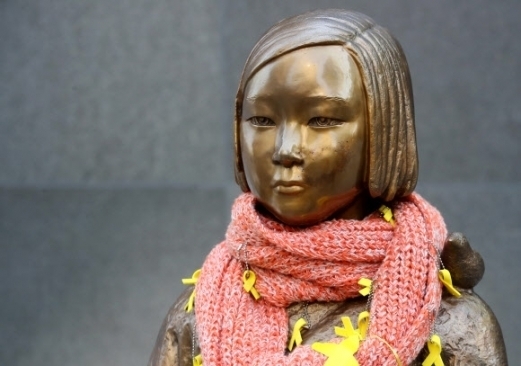 A girl statue symbolizing victims of Japan's sexual slavery during World War II. Yonhap
The fourth of its kind in the United States, the statue has been installed inside the Museum of Korean American Heritage in Manhattan, and is set to open Friday, US time.

The statue is identical in size to the one that stands in front of the Japanese Embassy in central Seoul, which was set up in 2011.

The other three located in the US are in California, Michigan and Georgia. In 2013, some conservative Japanese politicians visited Glendale, California, where the first statue was erected in the US, to ask for its removal.

According to historians, at least tens of thousands of girls and women in Asian territories were forced to work in Japanese military brothels during World War II, but estimates vary.

The issue continues to cause a rift between Japan and other Asian nations, although South Korea and Japan struck a deal in 2015 to resolve the issue through an apology and reparations from Tokyo.