[ The Korea Herald – Send E-mail ]
KORUS FTA amendment battle heading to National Assembly
By Julie Kim Jackson
Published : Oct 10, 2017 - 17:21
Updated : Oct 10, 2017 - 17:21
Following the decision to begin talks of amending the Korea-US free trade agreement last week, South Korea’s political parties are bracing for a full-fledged debate during an audit beginning this week, with the opposition lambasting the government for “failing to dodge” the US’ calls.

The National Assembly’s Trade, Industry, Energy, SMEs and Startups Committee is set to open its audit and inspection session Friday, focusing on the overall effects of the now five-year trade deal with the US on seven of Korea’s industrial sectors. Along with other trade officials, Seoul’s top trade negotiator Kim Hyun-chong is to attend the session.

“The Moon Jae-in administration did not follow the due procedure before making it an accomplished fact that the KORUS FTA will be revised,” said People’s Party Floor Leader Rep. Kim Dong-cheol. “By sticking to groundless and unrealistic optimism and no countermeasures, (Seoul) looks to be facing the negotiation table without due time to prepare strategies.” 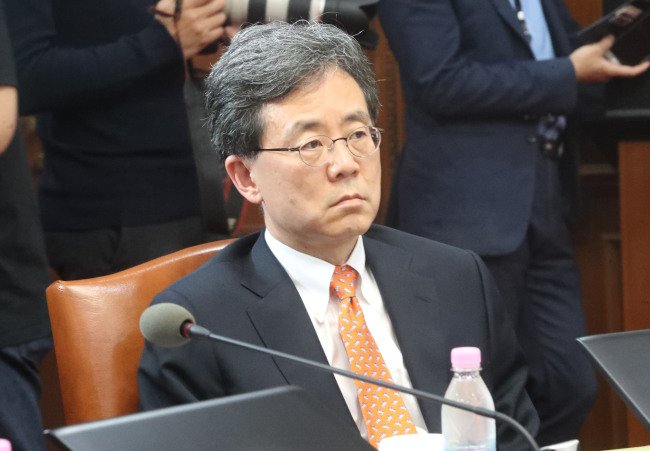 Korea's trade minister Kim Hyun-chong (Yonhap)
Meanwhile, Kim Tae-nyeon, chief policymaker of the ruling Democratic Party of Korea countered that it is not appropriate for the legislature to “excessively exaggerate and maliciously edit facts” to fan anxiety among the public.

“Revising the KORUS FTA can be demanded unilaterally under the deal, and the counterpart is required to consent to it. It is nothing more than having agreed to follow the due process,” Kim said, urging the opposition to “avoid unconditionally berating the Moon government and to instead join efforts to seek for the best alternative.”

On Oct. 4, Seoul’s top trade negotiator Kim Hyun-chong met with US Trade Representative Robert Lighthizer for the second session of the KORUS joint committee in Washington, where the two sides announced they had agreed to begin the process of amending sections of the deal.

Under the current law, a revision to the FTA must be preceded by an economic validity study, public hearings and ratification by the Assembly.

Meanwhile, both the ruling and opposition parties see eye-to-eye that an in-depth analysis on the effects of the trade deal over the past five years must be conducted first before either of the two nations start talks regarding specific amendments.

On Tuesday, local securities researcher Park Hyung-jung said the US would most likely emphasize deficits in the automobile and steel industries as its main agenda for the upcoming FTA amendment procedures.

“Considering that the US trade deficit is largely due to manufacturing, the United States will most likely raise this issue as its agenda for negotiations regarding the deficits in the automobile and steel sectors,” Park said.

Although the US reportedly did not make specific demands regarding trade revisions during the latest committee meeting, it was also reported that the counterparts requested the deal to be re-examined on a larger scale.

After the second round of joint committee sessions, Lighthizer released a statement saying, “I initiated joint committee discussions at the direction of the president to improve outcomes under this agreement for all Americans. I now look forward to intensified engagement with Korea in an expeditious manner to resolve outstanding implementation issues as well as to engage soon on amendments that will lead to fair, reciprocal trade.”

The statement also said that from 2011 to 2016, the US trade deficit in goods with Korea more than doubled, rising from $13.2 billion to $27.6 billion and that the US deficit in the auto sector alone is $24 billion -- an increase of 77 percent since 2011 -- and accounts for nearly 90 percent of the total goods deficit.