Bank of Korea Gov. Lee Ju-yeol, after chairing an economic-financial assessment meeting, said that there is a need to carefully keep tabs on uncertainties surrounding Pyongyang.

Local media has been pressing the BOK in regards to the overall health of the economy, which could allow the central bank to mark up key interest rates going forward. The press has been keen to determine if North's latest standoff with Washington will impact Asia's fourth largest economy and its policies. 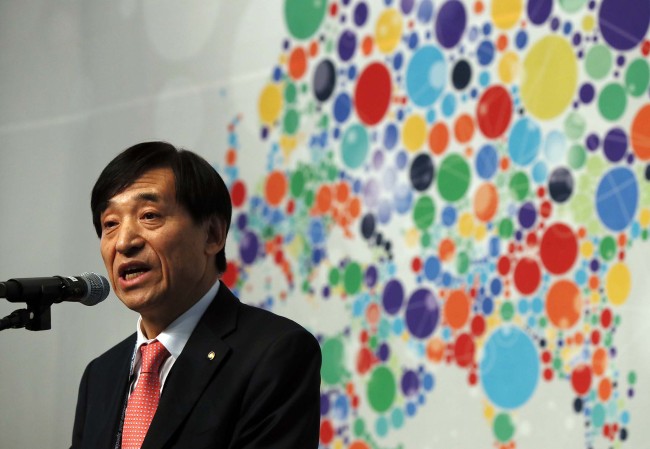 Bank of Korea Gov. Lee Ju-yeol (Yonhap)
"This week may be the turning point for policymakers focused on the issue before releasing South Korea's growth estimate next week," he said, hinting that the Pyongyang issue might influence local policy.

It had been widely speculated that the isolated country will carry out new provocations, such as launching long-range missiles that would trigger a strong response from the United States. US President Donald Trump has been threatening to "totally destroy" North Korea if it steps out of line, although he has not provided details.

The central banker, however, said that if economic recovery can be confirmed, the previously announced stance to curtail the current monetary easing stance remains valid.

On the matter of the South Korea-China currency swap deal that expires Tuesday, Lee said that due to various considerations it is best not to comment on the issue at present.

Last year, South Korea and China agreed to prolong the bilateral deal, which was first initiated in April 2009. The total that can be used in emergency situations stands at $56 billion.

A currency swap is a tool for defending against financial turmoil by allowing a country beset by a liquidity crunch to borrow money from others with its own currency.

Many analysts here have voiced concerns that the diplomatic tensions between Seoul and Beijing over South Korea's deployment of an advanced US anti-missile system are jeopardizing the currency swap agreement. They point out that while the Chinese yuan is not a basic key currency like the US dollar, a swap arrangement can give a positive signal to the market.

China has taken a series of economic retaliatory steps against South Korea, including a ban on group tours to South Korea, in protest at the deployment of the US missile defense system in South Korea.

Seoul and Washington said the Terminal High Altitude Area Defense system is only meant to counter North Korea's evolving nuclear and missile threats. But China has repeatedly pressed South Korea to withdraw the missile system out of concern that the deployment could hurt Beijing's security interests.

Related to the currency swap, the finance ministry has also been silent and has maintained it cannot confirm if negotiations are underway to extend the pact.

In the past, Seoul had currency swap arrangements with the United States and Japan that were not renewed. (Yonhap)