In the first phase, a total of 322 foreign words in textbooks for third and fourth graders will be replaced with Korean ones in their 2018 editions, the ministry said.

Most of the foreign words are Korean pronunciations of English, Chinese and Japanese words, it noted.

On the 30th page of the moral education textbook for third graders, for instance, the Korean pronunciation of knife, or "na-if," appears to explain a tool to spread jam on bread. 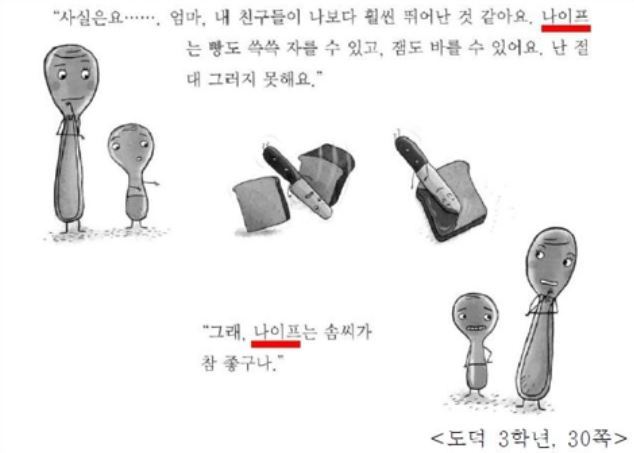 (Yonhap)
But a team of textbook researchers have proposed replacing na-if with kal, a Korean word for knife, of jugeok-kal (spatula knife), according to the ministry.

Other English words chosen for replacement include Korean pronunciations of guest, greenbelt, balance, campfire, camping, handsome and helmet, it noted.

A number of Japanese-style expressions, such as maejang (store), ji-bul-ha-da (pay) and sa-ryo (feed), will also be replaced with purely Korean words, it said.

"The list of foreign words to be removed from textbooks has been compiled based on opinions of Korean language researchers and other education experts to better express Korean language in new textbooks," said a ministry official.

"Efforts will also be made to remedy Chinese-style expressions in consideration of elementary students' progress in learning and growth."

The ministry said foreign words in textbooks for fifth and sixth graders will also be subject to changes in their 2019 editions. (Yonhap)