[ The Korea Herald – Send E-mail ]
Rate hike possible, regardless of inflation: BOK chief
By Bae Hyun-jung
Published : Oct 1, 2017 - 15:25
Updated : Oct 1, 2017 - 15:25
South Korea’s central bank suggested that a key interest rate hike is plausible in the near future in step with economic recovery, even if the inflation rate continues to remain slow.

“We may consider some adjustment (in the interest rate) without being restrained by (slow) inflation, as long as economic recovery holds out in the midterm flow,” Bank of Korea Gov. Lee Ju-yeol said Friday during a workshop with the press.

The central bank’s stance has remained unchanged from June-July, when it stated that a key rate moderation may be needed when the economic situation improves further, Lee explained. 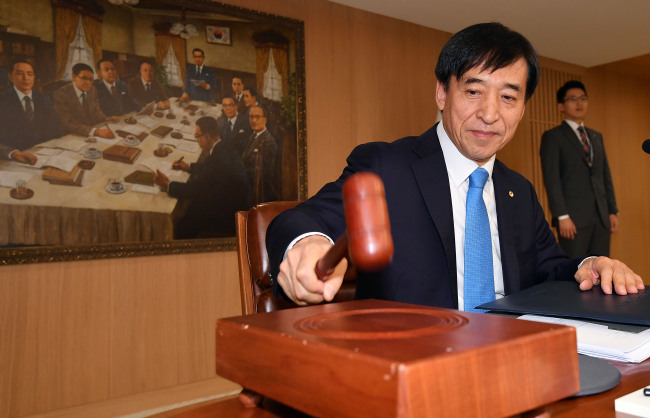 The monetary policy chief quoted Federal Reserve Board Chair Janet Yellen, who has been keeping the US central bank on track for upcoming rate hikes.

“Her claim is that it may be inappropriate to maintain the policy status quo until inflation reaches the 2 percent mark, and (the BOK) agrees.”

The BOK chief also pointed out structural and macroeconomic factors, which weaken the correlation between inflation and economic recovery.

“In most advanced countries, prices tend to remain stagnant or even slow down despite strong economic growth, a phenomenon which Yellen described as a mystery,” he said.

A key structural reason was the change in the labor market since the global financial crisis, he added.

“As employment mostly increased in the low-wage temporary workers and senior workers clusters, the correlation between employment indexes and wage level weakened significantly,” he said.

In the economic perspective, it is South Korea’s heavy reliance on exports and infrastructure investment that is keeping the inflation rate low.

“Prices would be more directly influenced (by recovery) in an economy that is steered by domestic consumption,” he said.

“The North Korean risk has certainly increased from a month earlier, but fortunately has not yet delivered a negative impact on the real economy,” Lee said.

“But considering all scenarios, we plan to have our overseas offices keep a close watch on the global financial market trend and foreign investors’ perspectives on the Korean economy.”

As for outlooks on monetary policies, especially the possibility of the key interest rate hike, the BOK chief reserved further comment.

“Due to the persistent instability factors, we find it difficult to speak further on monetary policies at this point in time,” he said, holding off further discussions until the next monthly monetary policy meeting, which is slated for Oct. 19.