[ The Korea Herald – Send E-mail ]
Auto industry outlook worst in eight years
By Julie Kim Jackson
Published : Sep 29, 2017 - 16:26
Updated : Sep 29, 2017 - 16:26
The economic outlook of the nation’s auto industry has plunged to its worst level in eight years due to concerns over continued labor strikes and THADD reprisals, according to a report by the Bank of Korea released Friday.

The bank’s data showed that the Business Survey Index for the economic outlook for the automobile industry in the month of October was expected to fall by 13 points compared to the previous month’s 59. The figure marks the lowest outlook level since July 2009. 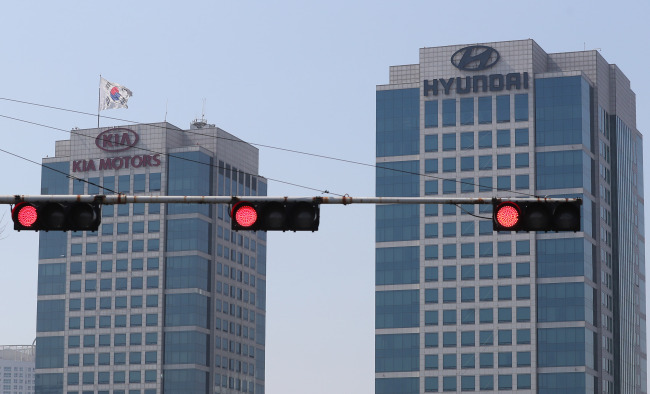 (Yonhap)
Seoul and Beijing continue to butt heads over the deployment of the THAAD missile defense system in Korea, leading to China’s blackballing of Korean businesses. Amid continuing political tensions, Hyundai and Kia Motors have seen huge drops in their international vehicle sales.

From January to August, Hyundai’s sales in China fell by 40 percent, while Kia Motors saw its sales numbers drop 53 percent during the same period.

However, despite the slump in the automotive industry’s BSI outlook, the BOK says Korea’s manufacturing industry as a whole still managed to see a BSI spike this month. The survey showed that business sentiment in the industry was at its highest in 18 months on the back of strong performances by the domestic electronics and chemical industries.

According to the BOK, only the electronics and chemistry sectors exceeded a BSI of 100.

The business index for electronics exports was 107 this month, eight points higher than last month, and the highest level in seven years since July 2010. The BOK attributes the boom in electronics to increasing demands in the semiconductor industry as well as the launch of new smartphones.

The local chemical industry hit a BSI of 102, marking a 12-point jump on the back rising oil prices. The index is the highest rise since January 2013.

As for the BSI of large versus small companies, large company indexes hit 88 points, a six-point jump compared to the previous month. Small businesses, on the other hand, saw its BSI at 74, representing only a one point increase.