This is the premise of upcoming film “Steel Rain,” set to hit local theaters in December.

The film stars actor Jung Woo-sung as Uhm Cheol-woo, a top North Korean special agent who flees to South Korea with the North’s leader to escape the uprising. 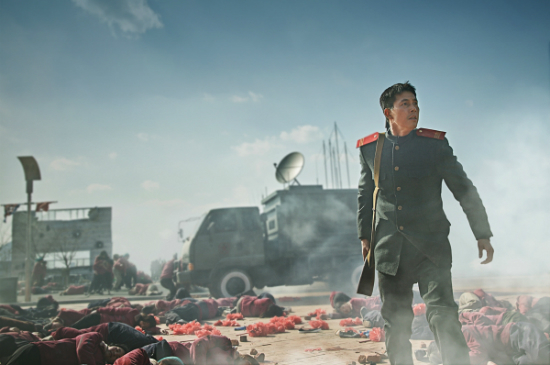 Jung Woo-sung stars in “Steel Rain.” (NEW)
The film is written and directed by Yang Woo-seok, who previously helmed “The Attorney,” an award-winning 2014 box office hit inspired by the late President Roh Moo-hyun.

“It’s now time when we have to face our reality in the cold light of day and actively think about our future,” Yang said in a press release.

Yang, also a webtoonist, in 2011 released a webtoon series of the same title centered around the death of North Korea’s leader, the collapse of its society and a crisis on the Korean Peninsula.

The film is the latest in several North Korea-themed thrillers that have opened in theaters recently.

Director Park Hoon-jung’s “V.I.P,” released in August, depicted the South Korean government and international society’s struggle over how to deal with a North Korean serial killer.

Director Kim Ki-duk took a more serious approach to Korea’s division in last October’s “The Net,” a drama film featuring a North Korean fisherman who accidentally crosses the maritime border to South Korea and experiences the shock of capitalism.

“(The film) is actually a very cruel film in itself, about how division tears apart one man’s family and spirit,” Kim said in an interview last year.