[ The Korea Herald – Send E-mail ]
[Herald Interview] ‘The hands that raised candles should now hold books’
Kim Eoun-ho, president of Hangilsa, looks back on more than four decades in publishing
By Kim Hoo-ran
Published : Sep 22, 2017 - 17:19
Updated : Sep 22, 2017 - 18:12
[Eye] Located smack in the middle of downtown Seoul, Sunhwadongcheon is an oasis offering respite from the hustle and bustle of life in a megalopolis.

Finding it is not easy -- it is situated in a residential apartment complex and there are no easily discernable signs pointing to it. But once inside, you will appreciate the quiet of the book cafe, William Morris prints on display at the gallery space as well as the bookstore selling Hangilsa Publishing’s publications from over the years.

It also aims to be a space for public discourse. “We are currently holding a lecture series on Hannah Arendt, one of the most influential philosophers of the 20th century,” said Kim Eoun-ho, president of Hangilsa Publishing, during an interview with The Korea Herald on Sept. 8 at the recently opened cultural space in Sunhwa-dong, Seoul. 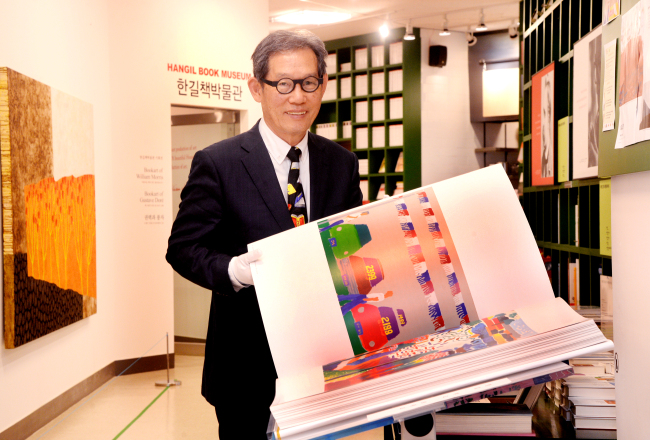 “She is a theorist who dealt with justice. She also explored the banality of evil,” said Kim in explaining the choice of the German-born American philosopher for Sunhwadongcheon’s first humanities lecture series. The subject seemed to be an apt one for Korean society at the moment, he said.

Kim is a former Donga Ilbo reporter who was one of some 100 reporters fired by the daily, bowing to pressure from the authoritarian Park Chung-hee regime in 1974. He founded Hangilsa in 1976. He may have started out not knowing much about bookmaking, as he professes, but over the years, Hangilsa Publishing has become one of the most prominent publishing houses in Korea, and Kim is a leading figure in the industry.

In his more than 40 years in publishing, he has published numerous bestsellers and steady sellers, including Cho chung-rae’s epic “Taebaek Sanmaek” and the Great Books Series of humanities and classics.

He also formed lasting relationships with some of the most influential figures of the times. “I met Ham Seok-heon every day for ten years,” he recalls. The late Ham was a prominent writer and human rights activist who was critical of Korea’s authoritarian regimes.

Another figure he remembers with great respect is the late Rhee Young-hee, a journalist and writer. “He is a leading figure in the intellectual history of this country and one of our authors,” he says. Another figure he kept in close contact with was the German-based composer Yun I-sang, who was kidnapped to Seoul and imprisoned on charges of spying for the North. Although he was eventually released, he was never allowed to return to Korea. Kim published “Conversations with Yun I-sang” in 1988. 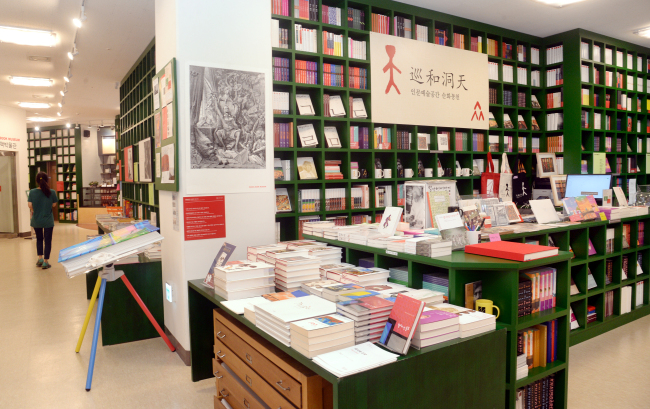 “Publishing is about giving form to the zeitgeist. It is tiring work, but always a joyous one, much like a celebration,” he says.

This year, Hangilsa plans to publish a total of 40 titles. “Publishing too many will be burdensome,” he says, pointing out that the publishing industry is in a crisis.

“People are just unable to ‘digest’ books anymore. They prefer something small, shallow and light,” he says. Even best-sellers are hard to sell and the lifecycle of books is getting ever shorter.

Smartphones, which people today seem to be permanently attached to, are dumbing down people, according to Kim. “It is impossible to engage in deep reflection. Ninety percent of the information that is floating about in cyberspace is unnecessary,” he says, his voice rising. “Smartphones are like fast food.”

“Mind you, the crisis in publishing is not brought about by e-books,” he says, adding that even e-books are not doing well. “People who don’t read paper books will not read e-books either,” he says.

Pointing out people’s obsession with health and well-being today, he says, “There should be a balance of physical health and mental health. They are not two different things.” His prescription is to read books to cultivate the mind.

Kim likens his roles as the head of Hangilsa Publishing, chairman of Bookcity Culture Foundation and chairman of Paju Book Sori International Book Festival to that of a preacher of a book movement.

“Without books, there can be no debates. Without debates, democracy, creative society and ethical society are not possible,” he says. Warning that we ignore reading at our own peril, he says with a sense of urgency and gravity, “If we continue to not read books, the country will eventually fail.”

Small neighborhood bookstores have been on the rise in the last couple of years. On a recent visit to Seochon, a hanok conservation neighborhood, which has attracted small restaurants, cafes, workshops and select shops, a number of tiny bookstores stood out. One tiny basement floor bookstore had a sign outside announcing its book of the month: It only sells one title each month. At yet another small bookstore with a few tables was a notice for book reading groups. Anyone was welcome to join beginner, intermediate, or advanced groups with a beginner described as someone who does not read.

Kim views this nascent rise of small neighborhood bookstores as holding the key to the resurrection of the publishing industry. “They are they tiny blood vessels that can revive the publishing culture,” he says. In fact, he has suggested a movement to open 1,000 small bookstores in the city to the Seoul Metropolitan Government.

It is said that parents who read to their children instill in them a lifetime habit of reading. Kim’s belief that youngsters must touch and open books and read out loud led to the opening of Bookcity Culture Foundation’s Forest of Wisdom, a large study in Paju open to the public.

Kim envisioned the place as an intellectual, cultural playground. He would be happy to know that Forest of Wisdom is packed with kids on the weekends reading out loud and turning illustrated pages with squeals of delight.

Forest of Wisdom is also a way to preserve and make use of resources that may otherwise go to waste. It has books shelves dedicated to books donated by prominent scholars and writers that could not find space in libraries.

Returning to the subject of reading, Kim says, “The hands that held candles should now hold books,” referring to monthslong candlelight protests that resulted in the impeachment of President Park Geun-hye and paved the way for the peaceful change of government through election.

“Only by studying and reading can you set the country and society right,” he says. “Books are a mightier weapon than any other.”