Kim has joined President Moon Jae-in on his visit to New York for the annual UN General Assembly this week.

Amid continuing provocations by North Korea, including the ballistic missile fired over Japan on Friday, the South Korean finance minister said before his trip that the economy remains relatively calm. 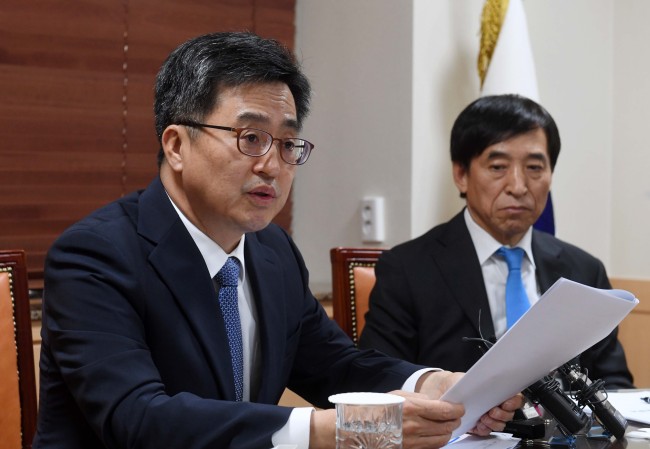 (Left) Finance Minister Kim Dong-yeon (Yonhap)
“Through the New York IR (investor relations event), we will show that the foundation of the South Korean economy is firm regardless of external risks such as the North Korean nuclear issue, and that the new government has a firm belief in the direction of economic policy,” Kim told reporters Monday following his visit to the Shinhan Bank headquarters in Seoul.

“Along with our willingness to resolve external risks, the North Korean nuclear issue shows that international multilateral cooperation will ensure the solid foundation of the South Korean economy,” he added.

Kim also revealed he intends to introduce the government’s new economic blueprint during his investors meeting. The minister said one of his main objectives is to raise the credibility and trustworthiness of the South Korean economy by outlining the Moon administration’s new fiscal policy direction.

“The aim is to increase confidence in the South Korean economy among overseas investors and international credit rating agencies,” he said.

Last month, the government released its state budget plan for 2018 calling for 429 trillion won ($381 billion) in an effort to back President Moon Jae-in’s people-focused and income-led growth economic blueprint. The government has announced it intends to spend money to bring about a paradigm shift in the Korean economy, adding it is necessary for the economy to start injecting funds and increasing spending in order to minimize mid- and long-term costs.

Kim is also expected to make a separate visit to the international credit rating agency during his New York trip in order to further discuss Korea’s economic and credit rating situations. He stated he would also strive to raise topics regarding other fiscal issues including financial restraints faced by the country’s automobile and shipbuilding industries.