This is the missile with which the communist regime had earlier threatened to contain the Pacific island of Guam, a key US military outpost about 3,400 kilometers from Pyongyang.

The Korea Herald looks into what an “operational Hwasong-12” means in the North’s missile capacities, as well as for South Korea, the US and other allies. 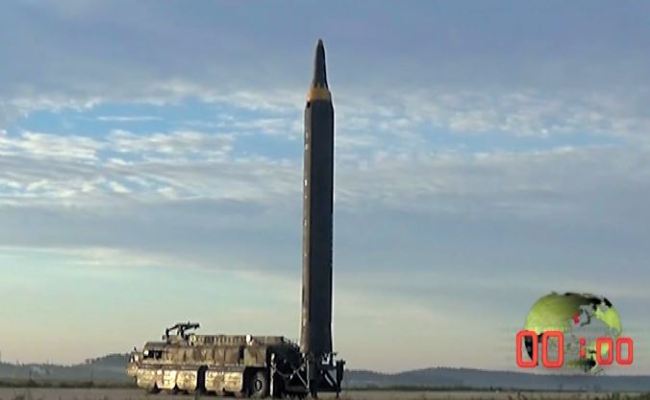 Although its first test, a disastrous failure, dates back to April 5, the missile came under scrutiny of outside experts only in May, when it was unveiled to the public in a military parade.

The North is believed to have conducted several test launches of the rocket since then, but most ended in failure and were not officially announced afterwards.

Then, on Aug. 28, the North fired it over Japan. It was the first time that a North Korean missile flew over Japan.

Then came Friday’s launch and Saturday’s declaration of it being operationally ready.

“The combat power of Hwasong-12 has been realized,” Kim was quoted as saying by the nation’s official Korea Central News Agency. “As recognized by the whole world, we have made all these achievements despite the UN sanctions that have lasted for decades.”


“Most serious missile to watch”


In early August, Pyongyang had threatened to create, with Hwasong-12 missiles, an “enveloping fire” near Guam. It later backpedaled from the threat, saying it would decide after “watching the behavior of the US.”

Before Hwasong-12, Musudan missiles, or Hwasong-10s, were the North’s means to contain the US territory in the Pacific Ocean, where some high-profile US strategic assets are deployed in case of an emergency on the Korean Peninsula. The Musudan, however, is widely perceived by experts here as a failure.

In Friday’s test launch, the Hwasong-12 traveled 3,700 kilometers, demonstrating that Guam is well within its range. It was the country’s longest-ever test flight of a ballistic missile.

“It is feared that the North may now have the capacity to strike Guam, although not the US mainland,” a source at the South’s military said.

Experts say the recent launches do represent a disturbing development: The missiles lifted off at a normal angle as in real operational conditions, not at a lofted angle as in previous tests.

Another key development is enhanced mobility.

Photos of the launch, released Saturday by the North’s daily Rodong Sinmun, showed that the Hwasong-12 was lifted off directly from a truck-mounted launcher. South Korean military had earlier said the launch site was near Pyongyang‘s Sunan airport. In previous tests, the North had moved a missile with the transport erector launcher, or TEL, but offloaded and placed it onto a separate launch pad before firing it. A road-mobile missile makes it more difficult for enemies to detect and respond.

“After blastoff, the vehicle used looked intact. The North appears to have solved technical problems it faced earlier,” Yang Wook, a senior researcher of the Korea Defense and Security Forum, was quoted as saying by Yonhap News Agency.

“The mobility of the Hwasong-12 has been advanced and it appears to be the most serious North Korean weapon to watch.”

Despite the enhanced range and mobility, some experts still doubt whether the missile can really deliver in an actual combat, citing lingering questions over its accuracy and re-entry technology.

David Albright, the founder and president of the non-governmental Institute for Science and International Security, said it is difficult to say that Hwasong-12 is a missile with high accuracy at the current stage of development.

It’s more equipped to attack an area with condensed population rather than a small military base, he said on Radio Free Asia, adding that its circular error probable, or the distance by which a missile can miss its target, is estimated to be 5 to 10 kilometers.

He also said it is difficult to extract from the latest test whether the missile has a re-entry vehicle needed to return a warhead from space to the atmosphere to hit the intended target.


For the past five months at least, the Hwasong-12 has been the main focus of North Korea’s weapons program. Between the first test launch in April and Friday, the regime launched 11 missiles. Six of them were Hwasong-12s, local broadcaster KBS reported, although early tests were officially classified by military intelligence here as “having involved an unknown projectile.”

Now that the Hwasong-12 has been declared operationally ready, the North is likely to shift its focus to Hwasong-14, which Pyongyang claims as its first intercontinental ballistic missile capable of striking the US mainland.

Kim on Saturday also indicated more missile tests would be forthcoming, saying all future drills should be “meaningful and practical ones for increasing the combat power of the nuclear force” to establish an order in the deployment of nuclear warheads for “actual war.”

The North first test-fired Hwasong-14 in July. On Sept. 3, the regime conducted its sixth and largest underground nuclear detonation which it claimed was a test of a hydrogen bomb that can be fitted onto an ICBM. The North said it was a “perfect success.”