In a floor vote that took place more than two months after Kim Yi-su’s confirmation hearing, 145 out of 293 lawmakers present voted for the nominee, while another 145 voted against him. One abstained. Two votes were listed as invalid.

It was the first time a court chief designate was rejected by the legislature. 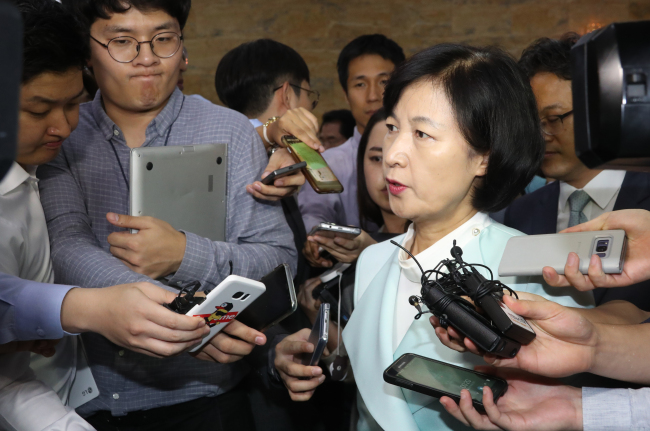 Rep. Choo Mi-ae, chairwoman of the ruling Democratic Party of Korea, is surrounded by journalists at the National Assembly in Seoul on Monday, after the parliament voted to reject the Constitutional Court president nominee Kim Yi-su. Yonhap
Cheong Wa Dae strongly denounced the parliament.

“We didn’t even imagine (this could happen,)” said the presidential office’s spokesperson Yoon Young-chan. “What happened at the Assembly is a blatant display of irresponsibility and an objection for the sake of objection,” he said.

Kim has been acting as the president of the top court since March. Despite the parliament’s veto, he will continue to serve in the role until a parliament-approved chief takes office. His term as Constitutional Court justice ends in September next year.

Yoon said the presidential office had not prepared a substitute for Kim.

Rep. Choo Mi-ae, chief of the ruling Democratic Party, immediately blamed the opposition People’s Party, claiming that all of its 120 lawmakers joined the vote and supported Kim. Her claim, however, could not be verified as it was a secret vote.

“A group which has pursued its own partisan interests only will bear the blame for what happened today,” she said in a thinly veiled attack on People’s Party.

Ahn Cheol-soo, chairman of People’s Party, when asked about the vote turnout, said that his party of 40 lawmakers is “the decider” who can make or break the Moon administration’s legislative agenda.

“Like I said several times already, in this 20th National Assembly, the People’s Party has (the ultimate power) to decide,” he said.

Ahn, who was Moon’s contender during May’s presidential election, added that his party did not intend to use Monday’s vote on Kim as a chance to show its political clout.

Heading into the vote, two conservative parties -- Liberty Korea Party and Bareun Party -- made it clear that a veto of the liberal-minded justice is their official party stance.

People’s Party, pursuing the stated “Third Way” between the left-right rivalry, left it up to individual lawmakers to decide.