China has been quick to criticize Seoul’s decision, raising concerns that it will carry out further economic retribution against South Korean entities operating in the country. 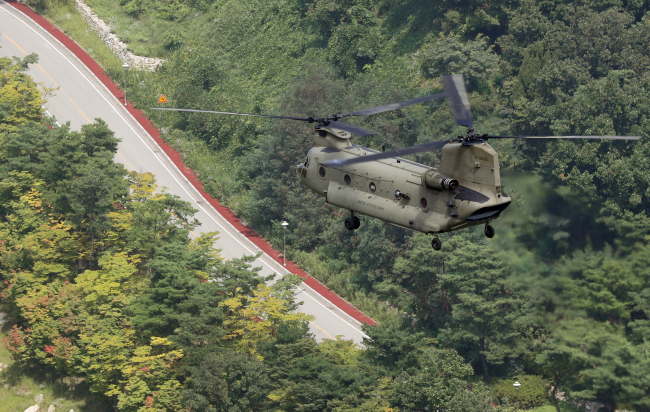 A US chopper flies above the Seongju military base (Yonhap)

Chinese authorities lodged a formal complaint Wednesday with Seoul’s ambassador to China, Kim Jang-soo, and on Thursday Beijing’s Foreign Ministry issued a statement calling on Seoul and Washington to call off the THAAD deployment.

Chinese media outlets have also attacked development, with one daily claiming that THAAD will become a “cancer that damages regional security” along with North Korea’s nuclear program.

The government maintains that Thursday’s deployment is temporary, but the move has been taken as the first step toward a permanent decision.

Critics say that Moon has broken his promises on the issue, which included conducting a full environmental impact study and giving the National Assembly the final say in the matter.

While some Moon supporters who oppose THAAD deployment accuse the president of “betraying” them, the government and the presidential office maintains that the move was unavoidable, and necessary in light of the growing North Korean threat.

Cheong Wa Dae also refuted claims that the president had gone back on his word, citing the position Moon took on the issue in his election campaign.

During the election campaign, Moon stated that deploying THAAD is an option if North Korea conducts another nuclear test, and if Pyongyang cannot be controlled by China.

Regardless of Cheong Wa Dae and the government’s attempts to appease the public, Moon’s approval rating has taken a hit, falling to the lowest level since he took office on May 10. The latest Gallup Korea poll showed that Moon’s approval rating fell to 72 percent, while the figure came to 69 percent in a poll by Realmeter.

With conflict over the US missile defense system continuing, Moon is said to be mulling over whether to make a public address.

“(Moon) is considering a message (to the public) regarding THAAD deployment,” a high level Cheong Wa Dae official said.

He added that the time, and format of the message have not been decided, and that the president will address the issue if the “right message” is drawn up.

The ruling Democratic Party of Korea, which has opposed THAAD deployment from the start, defended the decision saying that it was unavoidable in light of recent developments.

“The deployment of THAAD was an unavoidable choice to secure national security,” Democratic Party floor leader Rep. Woo Won-shik said on Thursday at the party meeting held after THAAD launchers were taken to the Seongju site.

With the exception of the left-wing Justice Party, the move has been welcomed by the opposition parties.

The conservative main opposition Liberty Korea Party, which has opposed and criticized Moon’s every move, has welcomed the decision while maintaining its attack on the administration.

The Justice Party, for its part, accused the administration of double standards, with its members meeting the Minister of National Defense Song Young-moo on Friday to convey the party’s position.