[ The Korea Herald – Send E-mail ]
White House denies Trump’s claim of KORUS FTA withdrawal
By Julie Kim Jackson
Published : Sep 7, 2017 - 17:35
Updated : Sep 7, 2017 - 18:17
Washington appears to be retracting US President Donald Trump’s claims that the US is looking to terminate the Korea-US Free Trade Agreement, said a report by Inside US Trade on Thursday.

According to the publication, White House officials have assured key lawmakers that the US government will not be pursuing talks of withdrawing from the 5-year-old trade deal amid opposition by lawmakers and government officials from both countries.

“The plan to terminate the agreement had been discussed with several Capitol Hill offices including that of House Speaker Paul Ryan (a Republican of Wisconsin), who was one of the lawmakers informed that the administration had decided not to withdraw,” the report’s sources stated. 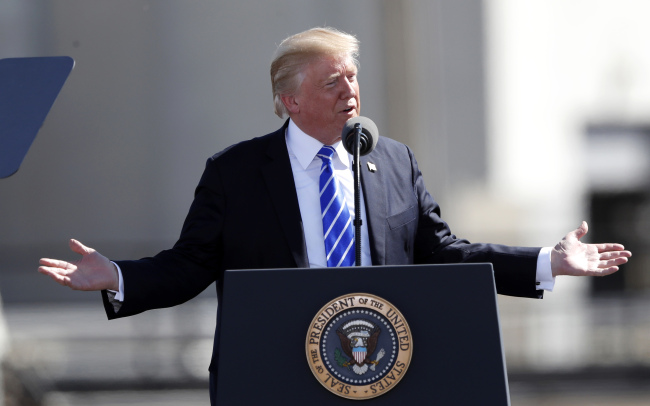 (Yonhap)
“But the business community has been asked by some inside the White House to keep up the pressure against withdrawal because, as one source put it, ‘POTUS (President of the United States) is so unpredictable,” it added.

The news comes after Trump told reporters during his visit to hurricane-hit Houston in Texas over the weekend that he would be discussing the future of the KORUS in the upcoming week, hinting that he would be looking for ways to pull out of the trade pact. The president blames the FTA for the US’ deepening $27.6 billion trade deficit with Korea and for taking away US jobs.

The statement drew opposition from not only Korean government officials, who continue to insist the two nations further analyze the FTA, but also from US lawmakers who spoke out against Trump’s call to opt-out of the deal.

Withdrawing from the KORUS FTA “would not be good in any circumstance,” Arizona Sen. Jeff Flake said Sunday on CNN’s “State of the Union.”

Last month, officials from Seoul and Washington held a special joint committee session to discuss the US’ call for amending the trade deal. However, according to Korea’s chief trade negotiator Kim Hyun-chong after the meeting, the two nation’s failed to reach any agreement, citing differing opinions.

Although no official requests by Washington have been made to Seoul since the conclusion of the first joint session, the US is still expected to pursue amendments to the trade pact.

The Office of the United States Trade Representative released a press statement following the meeting in Seoul, stating that the Trump administration remains committed to amending or modifying terms of the trade deal to benefit American workers, farmers, ranchers and businesses.