The main bourse index Kospi shed 0.13 percent and closed at 2,326.62, while the secondary market index Kosdaq took a 0.33 percent loss.

Both markets opened higher Tuesday, but swung back to negative territory with foreign sell-offs emerging from late morning trade. The Kospi opened 0.37 percent higher, while the Kosdaq was up 0.69 percent at 9 a.m. 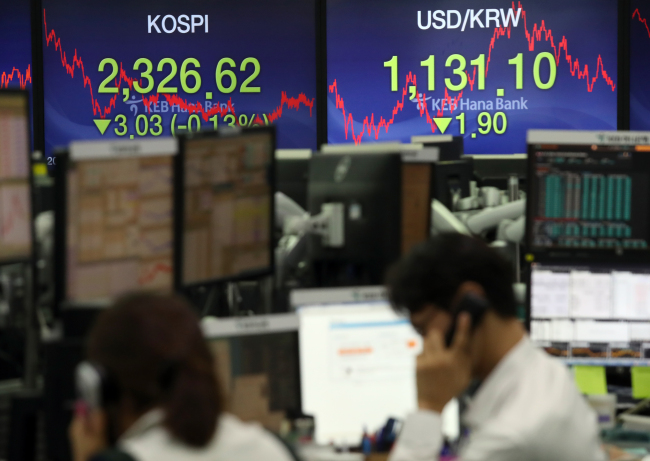 The top two Kospi-listed firms gained in the weak market. Samsung Electronics gained 1.56 percent, while SK hynix rose 2.64 percent. But the two giants were among the three gainers out of the 20 largest-cap Kospi-listed firms. Losers outnumbered gainers 569 to 240 on the first-tier market.

Despite weakness in stock markets, analysts said the North Korea threats would rather provide investors with opportunities to buy Korean stocks at lower prices.

Yoon Ji-ho, a chief strategist at Ebest Investment & Securities, likened the geopolitical risk to “nervous disease,” saying the North Korea risks had led to the same conclusion of “short-term noise” in the markets that ended up boosting investors’ buying momentum.

Unless military conflict breaks out on the Korean Peninsula, the fundamentals of South Korea’s listed firms will be largely unscathed, he added.

Local currency strengthened by 1.9 won against the dollar. The greenback was trading at 1,131.1 won at the Tuesday session’s close.