South Korea raised the anti-terrorism alert to the current step 2 or "caution" level in the wake of the deadly terror attacks in Paris in 2015, and has since maintained the status through regular situation assessment meetings.

On Tuesday, the government held an interagency anti-terrorism meeting comprising officials from 11 agencies and decided to keep the current status, the Prime Minister's Office said. Participating agencies included the presidential Office of National Security, the National Intelligence Service, the defense ministry and the National Police Agency. 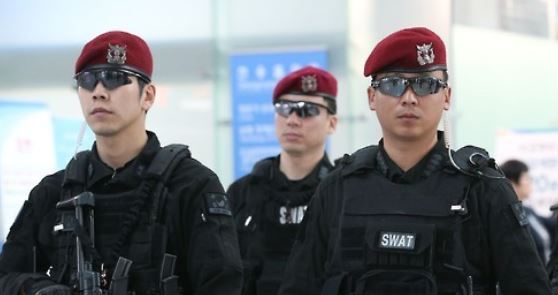 (Yonhap)
South Korea's anti-terrorism status has four levels, with level 1 meaning ordinary times with no threats. The current level 2 calls for strengthening guard at major state facilities and enhancing the security of hazardous materials that could be used in terrorism.

During Tuesday's meeting, officials discussed ways to prevent car terrorism in which attackers slam their cars into people. The Land and Transportation Ministry reported that it will implement regulations requiring large buses and freight trucks to be equipped with emergency braking and lane keeping systems.