But the calls fell on deaf ears as the LKP boycotted a parliamentary plenary session and ratcheted up its assertion that the Moon Jae-in government is moving to hold sway over public broadcasters.

After a Seoul court issued a writ last week to detain Kim Jang-kyom, the head of local broadcaster MBC, over alleged unfair labor practices, the LKP decided to boycott all legislative sessions, except security-related ones, arguing the warrant is a scheme to control the media.

"All people must be equal before the law ... They cannot claim a privilege because (Kim) is the head of a public broadcaster," Choo Mi-ae, the ruling party leader, said during a general meeting of party lawmakers. 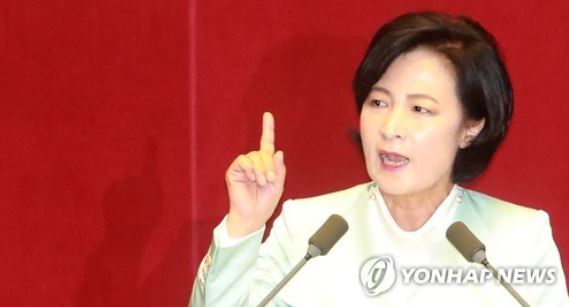 This photo, taken on Sept. 4, 2017, shows Choo Mi-ae, the leader of the ruling Democratic Party, speaking during a parliamentary plenary session at the National Assembly in Seoul. (Yonhap)
"The LKP's claim that the government is seeking to control the media is indeed deceiving the people," she added.

Choo, then, called on the rival party to "come to its senses" in due consideration of the security challenge acutely highlighted by Pyongyang's sixth and most powerful nuclear test to date on Sunday.

"I urge the LKP to immediately stop the demagoguery that has no justification," she said.

The National Assembly's plenary session in the morning failed to proceed as planned, because LKP floor leader Chung Woo-taik refused to deliver his policy speech in line with the boycott. The session lasted only two minutes.

"Today's plenary session cannot proceed normally," parliamentary speaker Chung Sye-kyun said during the session. "I offer my apology for failing to smoothly carry out the session when it has to devise measures to the North's nuclear experiment and take care of people's livelihoods."

The minor opposition People's Party joined the criticism of the LKP, saying the warrant against the MBC chief is a legitimate law enforcement activity.

"The investigation into alleged unfair labor practices is a due legal procedure," party floor leader Kim Dong-cheol said during a meeting with senior party officials. "The parliamentary boycott is tantamount to the LKP renouncing state affairs."

Mindful of growing criticism, the LKP decided to stop its off-parliament activities during President Moon's trip to the Russian port city of Vladivostok for a regional economic forum from Wednesday to Thursday.

But the party continued to intensify its offensive against the Moon administration, rejecting the president's earlier proposal to form a permanent policy consultation body involving the government, and ruling and opposition parties.

The LKP argued that the body appears aimed at shifting the government's responsibility for policy failures to the opposition parties.

"President Moon has yet to apologize for bungled efforts to communicate with the opposition bloc, his government's security ineptitude ... and attempt to control the media," LKP floor leader Chung argued.

Later in the day, some 80 LKP lawmakers visited the presidential office Cheong Wa Dae to protest what they call an attempt to control the media.

They demanded a meeting with Moon and his chief of staff, Im Jong-seok, but Cheong Wa Dae did not accept the call.

"We expected the president to directly talk with opposition lawmakers and say words that would help assuage public concerns, as he has repeatedly stressed the importance of communication," LKP floor leader Chung told reporters.

"It is deeply regrettable (that Moon did not meet us)," he added. (Yonhap)