[ The Korea Herald – Send E-mail ]
Trump’s KORUS FTA opt-out a ‘real possibility’: expert
By Julie Kim Jackson
Published : Sep 4, 2017 - 16:58
Updated : Sep 4, 2017 - 17:57
Amid continued ambiguity regarding the fate of the Korea-US Free Trade Agreement, some industry experts are predicting high odds that US President Donald Trump may actually terminate the trade deal, following North Korea’s escalating threats, which are adding tension to the political and economic climate between South Korea and the US.

“While some people view Trump’s threats as being bluffs, in my expert opinion, Trump deciding to back out of the Korea-US Free Trade Agreement is a real possibility,” Yang Jun-sok, an economics professor at Catholic University of Korea, told The Korea Herald.

The expert added that the US president is struggling to uphold his campaign promises to his Midwest supporters to stand tough and renegotiate international trade deals that are destroying American jobs.

During his visit to hurricane-hit Houston in Texas over the weekend, Trump told reporters that he would be discussing the future of the KORUS FTA in the upcoming week, hinting that he would be looking for ways to pull out of the 5-year-old trade pact. 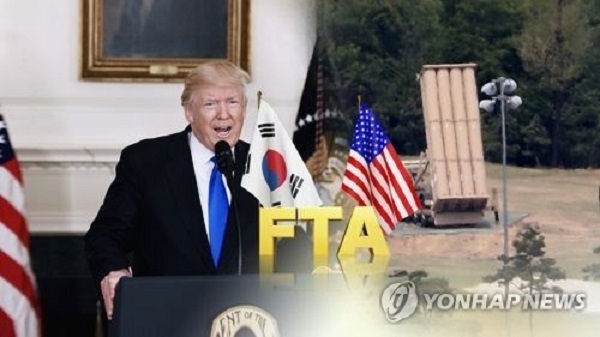 (Yonhap)
Although senior White House officials stated that a final decision has not been made, Inside US Trade reported the administration may be considering withdrawing from the trade deal as early as this week.

While Seoul and Washington are gesturing at a joint effort to stop the escalating nuclear threats by North Korea, experts speculated that the US is now more likely to pull out of the bilateral deal as President Trump took to Twitter to accuse Seoul of being soft on Pyongyang.

Some expressed the view that the US leader might be using the economic agenda with South Korea to gain an upper hand in North Korea’s nuclear issues.

“In the past, presidents tended to separate political and economic matters when dealing with the international community, but this does not seem to be the case with President Trump. Therefore, we should take his threats of pulling out of the KORUS FTA seriously.”

According to the New York Times on Sunday, a member of Trump’s foreign policy team said the president’s decision to take aim at South Korea was his way of saving face and flexing his political powers. “The president’s brand is based on projecting strength, and since he could not throw a real punch at Pyongyang, Seoul was the logical target,” the article said.

Last month, officials from Seoul and Washington held a special joint committee session to discuss the US’ call for amending the trade deal. However, according to the head of Korea’s chief trade negotiator Kim Hyun-chong following the summit meeting, the two nation’s failed to reach any agreement, citing differing opinions.

Under the terms of the FTA, the deal can be terminated 180 days after one party notifies the other of its withdrawal.

According to data compiled by the Korea Economic Research Institute and the Korea Institute for Industrial Economics & Trade on Sunday, if the KORUS FTA is abolished, Korea’s export loss to the US is expected to reach 30 trillion won ($26.4 billion) over the next five years and the loss of some 240,000 jobs. However, the data also suggested the US economy would suffer more than Korea if the FTA is abolished.

In the event the trade deal is nullified, the tariff rate would be restored to its original level before the agreement came into effect, with experts saying the declining price competitiveness of Korean exports would inevitably lead to a decline in exports to the US.

The data projects that Korea’s imports will be significantly reduced compared to US exports. If the two countries adopt the most favored nation treatment tariff rate, the US tariff rate on Korean imports would stand at 1.6 percent, while the tariff rate on the US imports to Korea would be 4 percent higher.