Using the 189-seat B737-800 passenger jet, T'way Air began services on the Jeju Island-Tokyo route Saturday, the low-cost carrier said in a statement. In late June, the company kicked off flights between the resort island and Osaka. 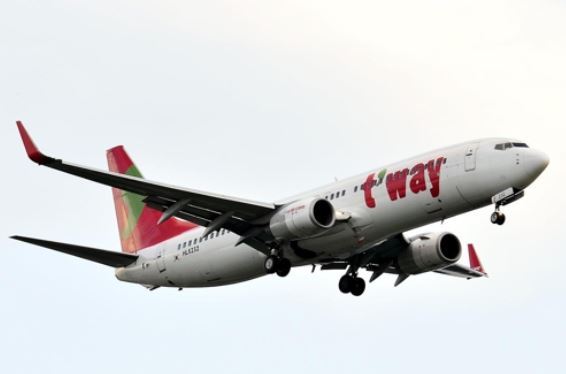 This photo provided by T`way Air shows one of its B737-800 jets. (Yonhap)
T'way Air now operates four domestic routes to Jeju Island and 42 international routes to 27 cities in eight countries, including Guam, Saipan, Tokyo, Shanghai and Hong Kong, it said.

South Korean airlines have diversified their routes to offset lower travel demand from China amid ongoing political tensions between the two countries over the deployment of an advanced US anti-missile system in South Korea to deter North Korean provocations.

In March, Beijing banned the sale of group tour packages to South Korea in retaliation for the deployment, which it argues can be used to spy on its military. (Yonhap)