Moon had a 20-minute telephone conversation with Abe earlier in the day to discuss ways to respond to Pyongyang's latest nuclear test on Sunday, Cheong Wa Dae spokesman Park Soo-hyun told reporters. It is the sixth time Moon spoke with his Japanese counterpart over the phone since he took office in May. 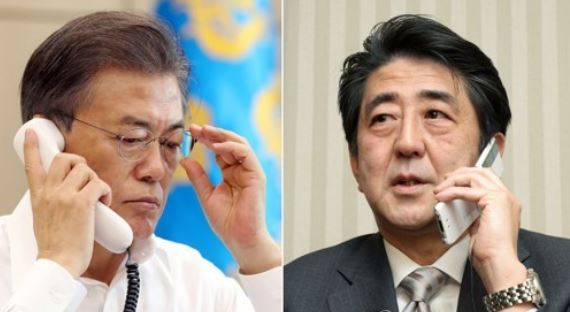 South Korean President Moon Jae-in (L) and Japanese Prime Minister Shinzo Abe (R) seen in the file photo on Sept. 4, 2017. (Yonhap)
Moon told his counterpart there is a need for "more substantive" measures against the communist state "to an extent that Pyongyang can indeed realize the pressure" through cooperation with the international community, he was quoted by Park as saying.

The president stressed the need to elevate pressure and sanctions "to the maximum level so that the North can bring itself to the negotiation table."

They also agreed to seek a stronger United Nations Security Council sanctions resolution against the reclusive regime, calling the latest nuclear test "a provocation whose scale and characteristic are very much different from its past (provocations) that poses a serious threat to the international community."

The call came a day after the North carried out its sixth and most powerful nuclear test. Pyongyang claimed it successfully tested a hydrogen bomb mountable on an intercontinental ballistic missile capable of reaching the United States. (Yonhap)