The National Assembly endorsed the resolution with 163 votes and seven abstentions a day after Pyongyang conducted a test of what it claims is a hydrogen bomb mountable on an intercontinental ballistic missile.

"The Republic of Korea's National Assembly will never tolerate any attempt to escalate tensions on the Korean Peninsula and strongly urges the North to immediately stop all of its provocative acts," the resolution reads. 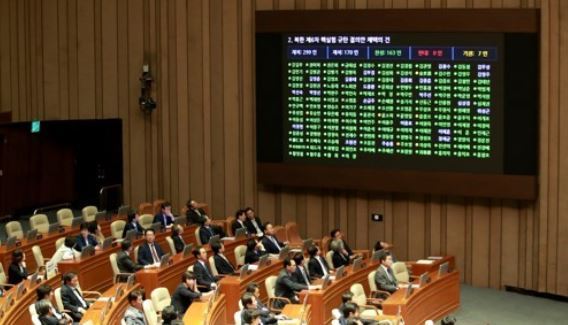 South Korea`s National Assembly holds a plenary session at its main chamber in Seoul on Sept. 4, 2017. (Yonhap)
"We also make it clear that its nuclear and missile provocations would not help its efforts to maintain the North Korean regime in any way, and warn that its continued provocations could lead to its international isolation and self-destruction," it added.

The resolution also called on the Seoul government to review its North Korea policy and seek effective measures in cooperation with the international community to "completely" root out its will to provoke. (Yonhap)