Gunilla Lindberg, head of the IOC's Coordination Commission on PyeongChang, on Thursday concluded her team's ninth and final visit to PyeongChang, some 180 kilometers east of Seoul, before the Winter Games. At her wrap-up press conference, Lindberg said she was "very pleased with the progress" by PyeongChang.

"This visit has given me full confidence that PyeongChang is ready to welcome the world next February," she said. "We saw firsthand the advancements that have been made in venues and infrastructure as well as heard updates on plans to further engage with Olympic fans. Details must now continue to be refined in the coming months to ensure the successful delivery of the Olympic and Paralympic Winter Games." 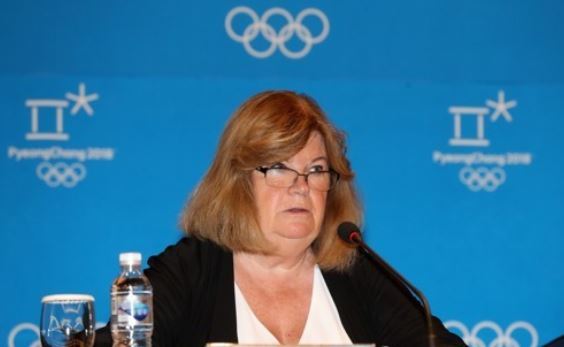 Gunilla Lindberg, head of the International Olympic Committee`s Coordination Commission on PyeongChang 2018, speaks at a press conference at Alpensia Convention Centre in PyeongChang, Gangwon Province, on Aug. 31, 2017. (Yonhap)
Lindberg also called on PyeongChang to generate more buzz for the Olympics with the start of the second phase of ticket sales next week and the torch relay set to begin on Nov. 1.

"This is an opportunity for Koreans to show their pride and be a part of what will be remembered as a historic time for their country," she said. "It'll be a once-in-a-lifetime experience for Koreans to come together and spur their athletes to Olympic glory. I would encourage them to not miss this chance."

Lindberg identified one area of concern for the IOC: PyeongChang's plans for the use of its Olympic venues after the Games. Lindberg said the definitive plans for several venues are still missing.

"The IOC once again requests the final plans be presented as a priority," she said. "This is a concern for us. We are expecting the plans to be ready by the end of November. We have pushed not only PyeongChang but local and national governments to come back with plans for the legacy."

Lindberg also noted that the absence of the National Hockey League pros in the men's hockey tournament will not have a negative impact on PyeongChang 2018. NHL pros have competed in every Winter Olympics since 1998, but the league office has announced it will not send the players to South Korea this year.

Lindberg said the IOC has been involved in all relevant negotiations with the NHL and the International Ice Hockey Federation, but the show will go on as scheduled.

Regarding the possible presence of North Korean athletes here, Lindberg said the IOC has extended an invitation to North Korea to take part in PyeongChang 2018, reiterating what IOC President Thomas Bach previously said.

"The IOC has promised to help North Korean athletes with extra training and to have the facilities if they need them for qualification," she said. "We hope that all our national Olympic committees practicing winter sports will be here in PyeongChang." (Yonhap)