An average wedding in South Korea costs nearly 46 million won ($40,000), excluding the price of buying or renting a home, a survey showed Thursday, with more people opting for smaller ceremonies.

Of the 45.9 million won total, the proportion spent on essential items like home furnishings accounted for 32 percent or 14.6 million won, followed by spending on presents and the wedding ceremony, according to the survey by the Korea Consumer Agency. 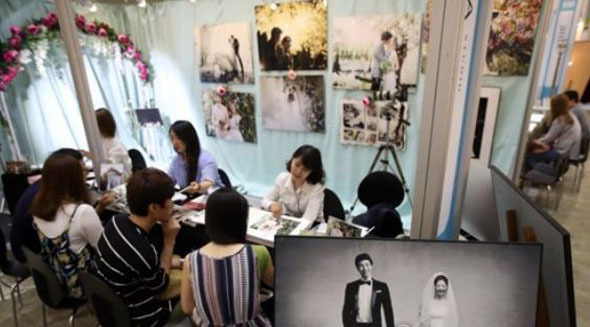 In this photo taken on July 30, 2017, soon-to-be married couples receive counseling at a wedding fair held in Seoul. (Yonhap)
The survey was conducted on 2,000 respondents with equal number of married and single people in their 20s and 30s.

The amount was smaller than 60 million won anticipated by unmarried respondents, but 94.6 percent of all respondents were negative about such high wedding costs, especially for presents.

Recently, a new trend of holding a small ceremony instead of an extravagant one has been spreading, especially among the younger generation, but many South Koreans still tend to rely on their parents to cover the wedding expenses. (Yonhap)