The ministry hosted a meeting titled “Mutual Cooperation with the Steel Industry” at the Lotte Hotel in Seoul on Wednesday morning, gathering ranking officials from the country’s steel industry, including Posco Chairman Kwon Oh-joon, to discuss ways to deal with ongoing trade issues with the Trump administration’s anti-dumping restrictions.

The meeting comes following members of the steel industry requesting government support to tackle issues arising from US restrictions on steel imports. The US has been slapping anti-dumping tariffs on Korean steel products, claiming the products entering the US market at competitive prices is adding to the US’ deepening trade deficit with Korea. 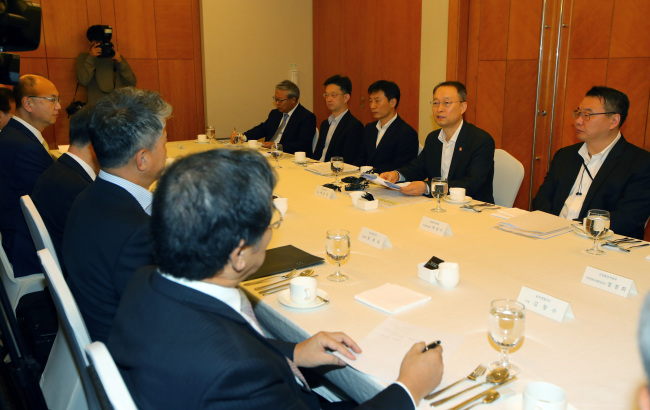 “Mutual Cooperation with the Steel Industry” was held at the Lotte Hotel in Seoul on Wednesday morning (Yonhap)
“The government needs to work closely with the public sector regarding pending issues such as expanding import regulations of major steel importers, as well the US’ Section 232 security impacts review,” said Baek Woon-kyu, a member of the Trade Ministry, during the meeting.

The meeting also follows a recent special joint committee meeting with Korean and US representatives in Seoul discussing Trump’s request to amend terms of the Korea-US Free Trade Agreement, which has the Korean steel industry on edge fearing increase trade barriers by the US.

The Trump administration previously stipulated that foreign steel makers are unjustly selling products at dumped prices and added that the US was looking to raise tariff rates as part of the Korea-US FTA renegotiation efforts.

“We will make an effort find solutions through continued consultations with relevant ministries,” Baek added.