“My Wish,” commissioned by the National Museum of Modern and Contemporary Art, Korea and on display at the museum’s Seoul branch in Sogyeok-dong as part of the artist’s first major retrospective in Asia, tells the stories of 13 marginalized people in Korean society.

Heard in the dark and silent exhibition hall of the museum through the statue of Kim Ku, a well-known Korean independence activist, the articulate voices of families of Sewol ferry disaster victim, laid-off workers, a migrant laborer and a North Korean defector carry a certain gravitas. 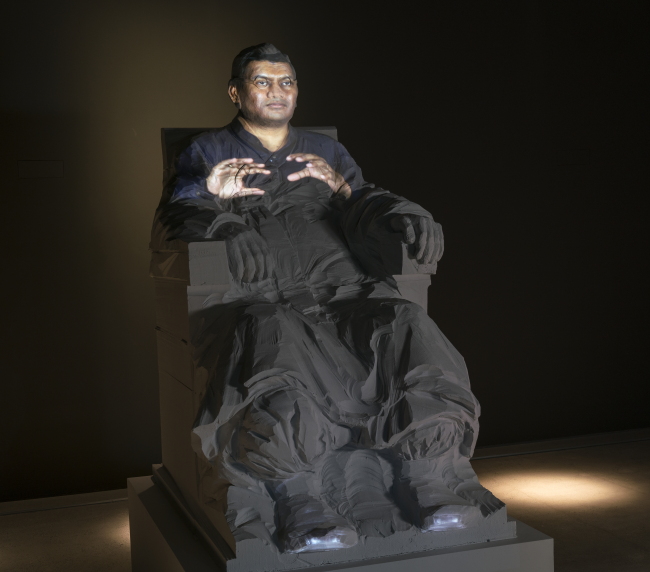 “My Wish” by Krzysztof Wodiczko (Courtesy of the artist/ MMCA)
What was often a barely audible voice on the evening news, drowned out by thunderous slogan-chanting in the background, can now be heard loud and clear. The viewers’ eyes are now fixed on the faces of the speakers -- faces that may otherwise not have commanded attention -- projected onto the face of the Kim Ku statue.

For once, these marginalized people have the ears and eyes of a rapt audience. And what they have to say sounds new and fresh, as if their stories were being heard for the first time. “My Wish” makes a strong case for Wodiczko’s argument that form and substance are connected.

“It is about listening,” said Wodiczko about the project, in an interview with The Korea Herald.

The premise that what you say will be heard gets people to speak what is on their minds. “The simple technique of doing the recording is encouraging them to speak,” he said.

The artist visited Korea for the first time in June 2016 for the “My Wish” project to scout for a statue. Statues of Admiral Yi Sun-shin and King Sejong located prominently in Gwanghwamun Square were among the suggestions. However, it was the statue of Kim Ku at Hyochang Park that Wodiczko settled on. 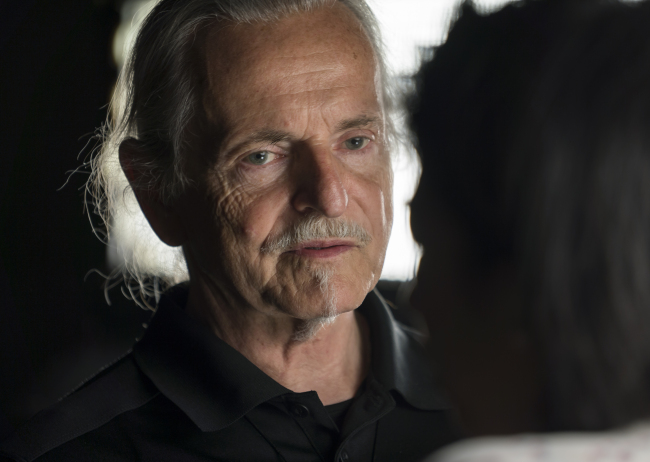 Krzysztof Wodiczko (MMCA)
He was moved by Kim Ku’s manifesto “My Wish,” which spelled out his vision for an ideal nation.

“Kim Ku became part of my attempt to understand Korean history and history of democratic thought and democratic process,” he said, adding that learning Korean history was not as difficult as he thought. “Poland, too, was colonized. I understand Kim Ku as someone who confronted mistreatment arising from militants who confuse negotiation with collaboration.”

When Wodiczko returned six months later, he found Korea at the throes of a movement that would eventually result in the impeachment of President Park Geun-hye and the election of Moon Jae-in, a former human rights lawyer, to the highest office in the country. He watched both the demonstrations calling for impeachment and the counterprotests by ultraconservatives.

While open microphones at these rallies are “very purposeful,” Wodiczko said, “They cannot do what I can do with cultural, artistic projects.”

“I encouraged them (the participants in the ‘My Wish’ project) to find other things to say. With a militant sounding song, I suggested why not sing it in a lyrical way the same song? It became a different song,” he said. “He said that he preferred the second song.”

The participants had very powerful things to say, Wodiczko recalled, especially the two mothers who lost children in the Sewol ferry disaster. “When it comes to the loss of children, it is hardly comparable to other experiences,” he said, noting that women are a leading force in the democratic process. “They affect change through speech and appearance in public space.”

“For me, the most important (part) is that they want the truth. It is not only personal, but there are ethical and political arguments in what they were saying. If truth is hidden from them, what about other things that are not revealed? Their demand is larger. They are speaking on behalf of the absence of truth,” said Wodiczko.

The works on display at the MMCA show the artist as an enabler, in the positive sense of the word. In his early years, he put his training in industrial design to practical use, creating devices that sought to improve the lives of marginalized people: Transportation devices “Homeless Vehicle” (1988-1989) and “Poliscar” (1991) sought to assist the homeless in urban centers while communication devices such as “Alien Staff” (1992) and “Aegis” (2000) aimed to facilitate communication between immigrants and the natives.

His interest in marginalized members of society continues to be explored in his recent works dealing with refugees and immigrants, including “Sans-Papier” (2006), a video projection featuring undocumented immigrants. As an advocate of “un-war” as opposed to “anti-war,” Wodiczko exposes the traumas of war veterans in “... Out of Here: Veterans Project” (2009) through aural and visual means.

“I simply help people to realize that their voices matter. They could say more about what they feel in front of others in public situations. Art and artists can get involved in cultural projects that help others to speak and share.”

In the process, the artist takes on the role of an agent of change. “Art can contribute to cultural change, is indispensable for any change, including political change.”