The Tottenham Hotspur star joined the national team at the National Football Center in Paju, north of Seoul, where players from the domestic and Asian leagues opened camp last Monday. They will take on Iran on Thursday and Uzbekistan next Tuesday in South Korea's final two World Cup qualifying matches.

These are essentially must-win games for South Korea, who are ranked second in Group A in the final round with 13 points, seven behind the already-qualified Iran. Uzbekistan are lurking behind with 12 points. Only the top two teams from the group will earn automatic berths at the 2018 FIFA World Cup in Russia, while the third-place team will fall into playoffs. 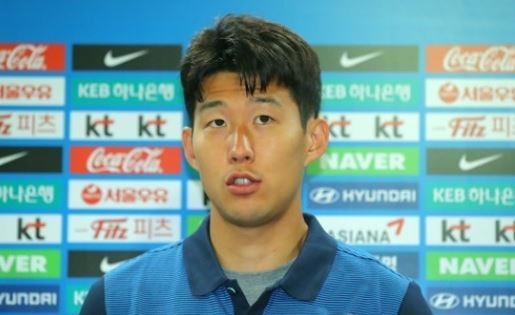 South Korean football player Son Heung-min speaks to reporters at the National Football Center in Paju, Gyeonggi Province, on Aug. 28, 2017. (Yonhap)
Son suffered a fractured right forearm during a World Cup qualifier against Qatar in June, but recovered in time to play for the Spurs at the onset of the English Premier League season. He made his first start of the season last weekend against Burnley and played 70 minutes.

Though Son still had a cast on his right arm, he said he's in good enough shape to play the full 90 minutes against Iran if need be.

"Why not? I did so much running (during rehab) that I think I am pretty well-conditioned," Son said when asked if he thought he could play the entire match Thursday. "I think my form is as good as it was last year."

And that's saying something, because Son enjoyed a banner season, scoring 21 goals to set a South Korean scoring record for a single season in Europe. He was also named the Premier League's Player of the Month twice.

Aside from improving health, Son's rapport with head coach Shin Tae-yong is another thing working in the favor of the 25-year-old. Son played for Shin at last year's Summer Olympics in Rio de Janeiro, and he said Shin's football philosophy suits him well.

"He caters to the way I like to play, and he understands what kind of things I'd like to do on the field," Son said. "I love the kind of football he wants us to play. I think we had great chemistry last year, and I am looking forward to playing for him again."

If South Korea beat Iran and Uzbekistan lose to China on Thursday, then South Korea will qualify for their ninth consecutive World Cup. But South Korea are mired in a four-match losing streak against Iran, all of those losses by the identical 1-0 score.

Iran have also been the stingiest team in the ongoing qualification round. They're the only nation in either Group A or Group B not to have conceded a goal in the current stage.

Son said he tipped his cap to the upcoming opponents for their defensive cohesion, and said he and his teammates must first try to overcome their mental block after losing to Iran so often.

"To break down their defense, we have to communicate with each other and help each other on the field," Son said. "We have to move quite a bit away from the ball to create space. And that's the kind of football that Coach Shin wants us to play. As long as we do what he tells us to do, we'll be fine." (Yonhap)