Park was discharged late Friday from the Gangnam District Office in southern Seoul, where he served as a public worker in substitution for his military service. All able-bodied South Korean men between the ages of 18 and 35 must serve in the military for about two years, as the country remains technically at war with North Korea. 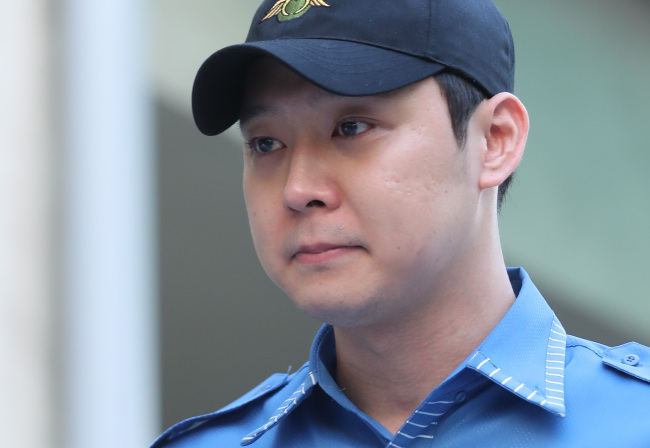 Park Yu-chun (Yonhap)
While serving his duty, the 31-year-old was embroiled in a scandal as four different women, all working at local bars, lodged complaints against him in June 2016, claiming he raped them.

Although he was cleared of rape charges later, the accusations and rumors about his private life left his clean and innocent image in tatters.

“I’d like to apologize to my fans from the bottom of my heart and also thank them (for their support),” Park said. “I know a lot of fans have been supportive. I’ll take time to reflect on myself.”

Park also thanked some 100 fans gathered outside the district office building but declined to comment on his immediate future.

In April this year, news broke that Park was getting married in September to a granddaughter of the founder of Namyang Dairy Product Co. Park reportedly got closer to his fiance as she stood by him when he went through the darkest patch of his life.

Park has cautiously hinted at his wish to return to show business when he shared details of his recent telephone conversation with a manager of his fan club on his Instagram account. (Yonhap)