Finance Minister Kim Dong-yeon held a policy briefing before President Moon Jae-in in Sejong, an administrative city some 130 kilometers south of Seoul, along with heads of the Fair Trade Commission and the Financial Services Commission.

"The ministry will expand the South Korean economy's capacity to grow 3 percent through establishing solid footing for innovative growth," the Ministry of Strategy and Finance said in a release. 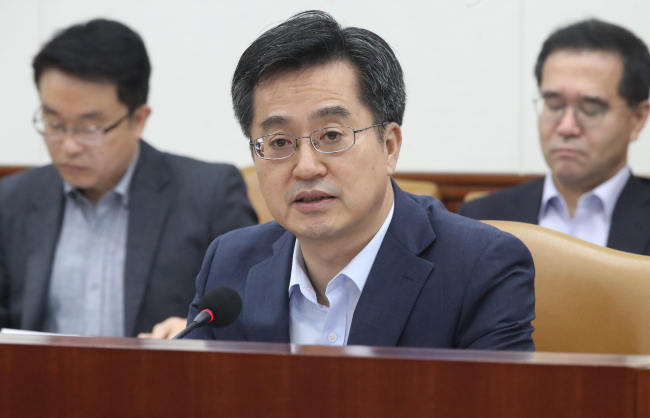 Finance Minister Kim Dong-yeon (Yonhap)
The ministry earlier forecast that Asia's fourth-largest economy will grow 3 percent in 2017, but many are concerned that the country may fail to meet the target due to recent signs of a slowdown.

As a first step, the ministry will revamp the government's finances to remove leaks and waste in spending and improve fiscal efficiency in a way to support President Moon's economic policy objective of "income-led growth," or an economy being fueled by consumption and demand.

To meet policy goals that call for increasing household income and spending with the help of various tools, some 178 trillion won is needed over the next five years.

The ministry said it has already secured 11 trillion won through fiscal restructuring for the 2018 budget layout and will spend the extra money in financing state projects to create jobs and support the needy.

Meanwhile, the FTC said it will keep close tabs on large businesses and forbid them from abusing their market dominant status, while protecting small-time businesses that have been marginalized by those with clout in a fierce and somewhat unfair market environment.

FTC Chairman Kim Sang-jo, a former civil rights activist, has stressed that he will put top priority on removing regulations that have limited competition, and strengthen punishment against illegal and unfair business practices. (Yonhap)