[ The Korea Herald – Send E-mail ]
Tension escalates over verdict to decide fate of Samsung heir
By Cho Chung-un
Published : Aug 24, 2017 - 17:11
Updated : Aug 25, 2017 - 11:34
On the eve of the court’s Friday ruling on Samsung’s de facto leader, tension mounted in South Korea’s corporate community over how the tycoon’s fate would impact the future of the world’s largest producer of smartphones and microchips.

On 2:30 p.m. Friday, a local court in Seoul is to deliver its ruling on Samsung Electronics Vice Chairman Lee Jae-yong, who is accused of five charges including bribery, flight of capital and embezzlement. The court decided to deliver the verdict without live coverage.

A special counsel has requested the court to sentence Lee to 12 years in jail, claiming that he provided financial assistance worth 43 billion won ($38 million) to the daughter of former President Park Geun-hye’s longtime friend in exchange for business favors. 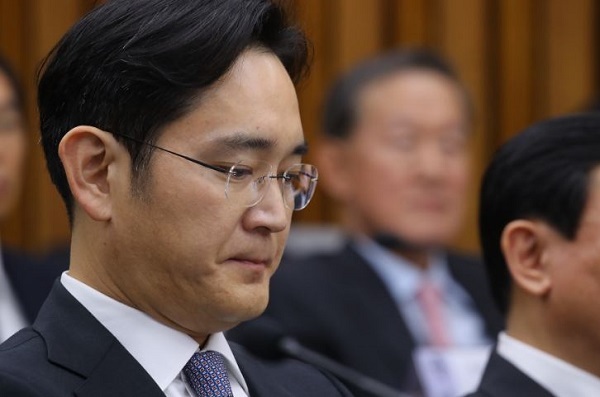 (Yonhap)
Samsung insiders have contended that the verdict will greatly impact the nation’s largest conglomerate.

If Lee is convicted, in particular on bribery charges -- which would directly affect the upcoming trials of former President Park -- it would deal a severe blow to Samsung and its reputation as a global tech firm, they have said. Moreover, an entrepreneur convicted of bribery charges is subject to the Foreign Corrupt Practices Act, a US federal law that could impose an “astronomical” amount of penalties on Samsung. Samsung Electronics, other Samsung affiliates and some US firms it acquired over the years are operating in North America.

The tech giant’s M&A drive could also face a major hurdle if it loses the trust of its potential partners, according to industry watchers. Samsung’s brand value was calculated as $38.2 billion by Forbes in May. But if Lee is found guilty, Samsung’s brand reputation that it built for decades will crash down, said Chung Sun-sup, head of Chaebul.com, a local corporate tracker.

Shielded by a group of 28 lawyers, the 49-year-old heir to Asia’s largest conglomerate -- which owns a wide range of businesses from smartphones to biopharmaceuticals -- has pleaded not guilty in the series of trials that began in March.

Lee’s lawyers claimed that he was pressured by Park to support the nation’s equestrian team that her friend’s daughter belonged to, and that he did not ask for favors. Choi Gee-sung, former head of Samsung’s control tower, the Corporate Strategy Office, said the decision to support Choi was made by himself and that he did not report the matter to Lee.

Special Counsel Park Young-soo said in his final statement that it is a typical corruption case based on the decadesold back-scratching alliance between politicians and businessmen. He also said that the case severely damaged the constitutional value of economic democratization and civil rights.

However, some conservative observers stressed the power of Samsung and said that Lee might walk free, as the counsel has a lack of concrete evidence to prove the conversation Lee had with the former president. Even if Lee is released Friday, the special counsel is most likely to appeal the case.

There have been mixed views on Lee and Samsung, with some questioning whether the tech giant will be able to survive without its next leader.

While some say it would be difficult for the group to paint a big picture without Lee, chaebol reformists call it an opportunity to end the long-standing problems of the chaebol model -- the opaque corporate governance and transfer of control within a group’s founding family, often involving illicit means.