This image shows US President Donald Trump (L) and North Korean leader Kim Jong-un. (Yonhap)
"Treasury will continue to increase pressure on North Korea by targeting those who support the advancement of nuclear and ballistic missile programs, and isolating them from the American financial system," Treasury Secretary Steven T. Mnuchin said in a statement. "It is unacceptable for individuals and companies in China, Russia, and elsewhere to enable North Korea to generate income used to develop weapons of mass destruction and destabilize the region."

Under the new measures, any property or interests belonging to the designated persons, which are in the possession or control of American citizens or within the US, must be blocked, according to the statement.

Americans are also "generally prohibited" from dealing with them.

The sanctions were drawn up in response to North Korea's "ongoing development of weapons of mass destruction, violations of United Nations Security Council Resolutions, and attempted evasion of US sanctions," the statement said.

The targeted individuals and companies are suspected of assisting people already sanctioned for their ties to North Korea's nuclear and ballistic missile programs, dealing in the North Korean energy trade, facilitating its exportation of workers, and enabling sanctioned North Korean entities to access the US and international financial systems.

North Korea has balked at all sanctions against the regime.

After the UN Security Council's adoption of new sanctions on Aug. 5, it threatened to retaliate against the US Those sanctions banned North Korean exports of coal, iron, iron ore, lead, lead ore and seafood.

They were designed to starve the regime of resources to develop its nuclear and ballistic missile programs by slashing its annual export revenues by a third.

Tensions escalated further when US President Donald Trump threatened to unleash "fire and fury" on Pyongyang, and the regime responded with threats to fire ballistic missiles towards the US territory of Guam.

It is the second time in less than two months that Washington has slapped so-called secondary sanctions on third-country entities and individuals suspected of aiding Pyongyang's weapons program.

In June, the US blacklisted a bank, shipping firm and two individuals from China.

In total, the US has blacklisted 23 entities and 22 individuals linked to North Korea since the launch of the Trump administration in January.

"We are taking actions consistent with UN sanctions to show that there are consequences for defying sanctions and providing support to North Korea, and to deter this activity in the future," Mnuchin said. 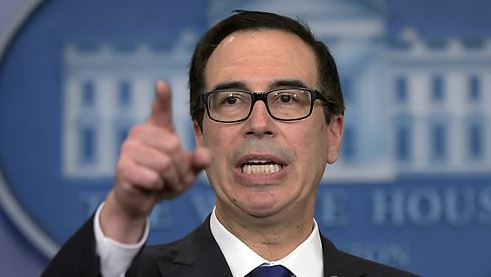 US Treasury Secretary Steven T. Mnuchin. (AP-Yonhap)
The Department of Justice later said two complaints have been filed with the US District Court for the District of Columbia to forfeit a total of more than US$11 million from three of the designated companies -- Velmur Management and Transatlantic Partners, both based in Singapore; and Dandong Chengtai Trading of China.

They are accused of laundering funds for sanctioned North Korean entities.

China slammed the US for exercising "long-arm jurisdiction" over its entities and individuals.

"We strongly urge the US to immediately correct its mistake, so as not to impact bilateral cooperation on relevant issues," a spokesperson of the Chinese Embassy in Washington said in an email.

The Russian Embassy did not respond to a request for comment.

South Korea's foreign ministry, meanwhile, welcomed the announcement, saying it hopes the sanctions will boost the allies' joint efforts to denuclearize the North.

"We understand it as a reaffirmation of the US determination to resolve the North Korean nuclear issue," it said. (Yonhap)