It's quite unusual for the US commanding generals serving abroad to gather in South Korea and release public statements together. 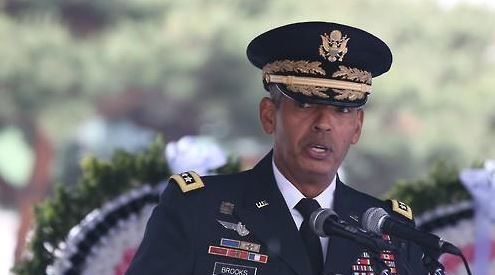 The US intelligence community also believes the secretive communist nation has made significant progress in miniaturizing nuclear warheads.

The US commanders are expected to stressed that a military option will be on the table as the last means to use in case of an eventual failure in efforts to resolve the North Korea issue via diplomacy, a defense source said.

They will also likely warn the Kim Jong-un regime not to miscalculate the allies' defense capabilities.

USFK chief Gen. Vincent K Brooks will be present at the press conference.

The commanders will reportedly make a tour of the new USFK base for the THAAD missile defense system in Seongju, North Gyeongsang Province, after inspecting the Ulchi Freedom Guardian combined exercise under way in Korea.