[ The Korea Herald – Send E-mail ]
Moon says even slight conflict on Korean Peninsula may threaten many lives
By Yonhap
Published : Aug 21, 2017 - 21:11
Updated : Aug 22, 2017 - 09:50
South Korean President Moon Jae-in again urged the United States Monday to refrain from taking any action against North Korea that could start an armed conflict on the peninsula, saying even the slightest conflict here may cost the lives of many South Koreans and US troops.

"President Moon said he understands why the United States has traditionally said all options were on the table to push North Korea to give up its nuclear ambitions. But he said even the slightest military action will lead to a clash between the South and North, and it will threaten many lives of not only South Koreans but foreigners, including US forces stationed in South Korea," Park Soo-hyun, a spokesman for Seoul's presidential office Cheong Wa Dae, said at a press briefing. 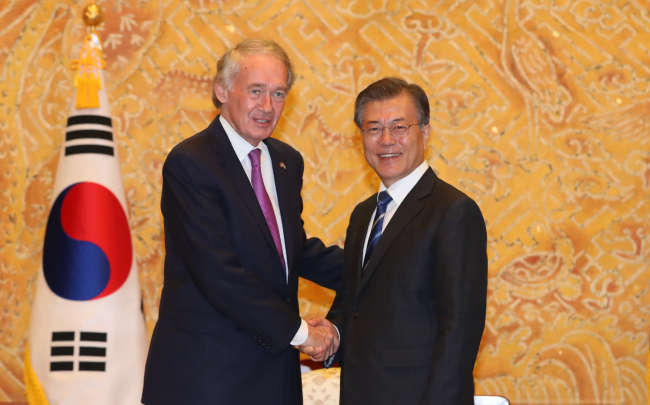 Senator Edward Markey (left), shakes hands with South Korean President Moon Jae-in at Cheong Wa Dae on Monday. (Yonhap)
Moon made the remarks at a meeting at Cheong Wa Dae with a bipartisan group of US lawmakers including Sens. Edward Markey (D-MA) and Jeff Merkley (D-OR), and two members of the House of Representatives, Carolyn Maloney (D-NY) and Ann Wagner (R-MO).

Moon's remarks followed a heated war of words between the communist North and the United States.

US President Donald Trump repeatedly hinted at possible military action against the reclusive North after Pyongyang said it may consider launching ballistic missiles toward the US-controlled island of Guam.

The US leader said the North will be met by "fire and fury." He later said his country's military options are now fully "locked and loaded."

The South Korean president agreed on the need to add more pressure on the North, but insisted the final and sole objective of the additional pressure must be to resolve the North Korean nuclear issue "peacefully" and through dialogue.

"President Moon noted the need to continue sending a clear message to the North that a brighter future will be guaranteed should it choose to come to the negotiations table, while continuously increasing pressure and sanctions on the North," the Cheong Wa Dae spokesman said.

Moon also stressed the importance of China's role in bringing the North back to the dialogue table, noting Pyongyang nearly entirely depended on its major ally, Beijing, for its exports. (Yonhap)