"I feel deeply sorry for causing concern to citizens due to the insecticide-tainted egg scandal," Moon said during a Cabinet meeting. "This has affected not only consumers, but also good-hearted farmers, restaurant owners and the food manufacturing industry."

While noting ongoing efforts to promptly deal with the public scare, the president acknowledged that ineptitude in coordinating responses among related state agencies and mistakes in handling the issue have further aggravated citizens' concerns. 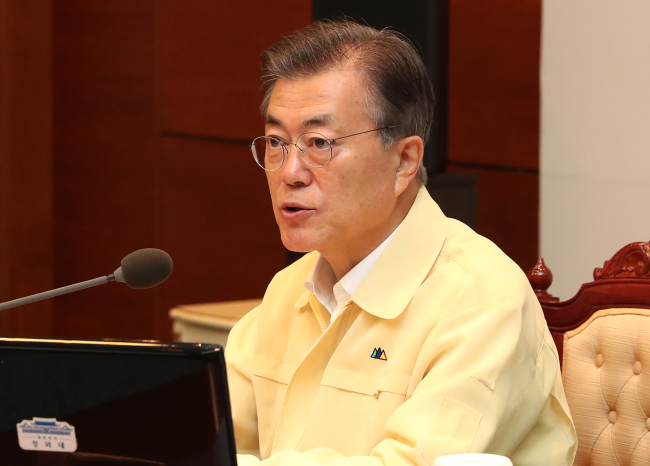 This image produced by Yonhap News TV shows South Korean President Moon Jae-in. (Yonhap)
"In the wake of this case, we have to examine the entirety of the livestock industry safety control system and promptly craft measures that can be trusted by citizens," Moon said.

"The food safety issue directly concerns citizens' health. Make sure we can restore public trust by providing detailed information about the process of settling this issue through measures," he stressed.

The remarks were made as the Ministry of Agriculture, Food and Rural Affairs announced the same day three more local farms were found with eggs contaminated by the banned chemical flufenoxuron, raising the total number of farms embroiled in the scandal to 52.

The government said all eggs from the farms in question will be recalled and destroyed.

The three were among 420 farms that underwent a re-examination for skipping some of the test items during the government's nationwide inspection on 1,239 poultry facilities which was completed Friday.

The latest announcement fueled criticism over the government for failing to thoroughly carry out the inspection, ballooning public concerns over food safety here.

Later in the day, the government said the insecticides found in the eggs are low risks to human health, adding it has seized 4.51 million eggs as of 1:30 p.m. so they can be discarded. About 421 million eggs were produced since July from the 49 farms originally detected after the first round of inspections took place, it added. (Yonhap)