[ The Korea Herald – Send E-mail ]
Time for nuclear balancing act?
Calls grow in Seoul to deploy tactical atomic weapons to counter NK nuclear threats
By Yeo Jun-suk
Published : Aug 20, 2017 - 16:27
Updated : Aug 20, 2017 - 17:56
Despite under a constant threat of war from the communist North Korea, South Korea has remained a nuclear weapons-free zone since 1991. But with Pyongyang nearing the finish line in its atomic weapons program, politicians and security experts in Seoul are calling for “a balancing act” to adapt to the new security environment on the Korean Peninsula: A North Korean nuclear weapon can only be deterred by a nuclear weapon -- by either South Korea’s own or the US, they said.

“We can’t fight against the North with bare hands,” said Rep. Jeong Yong-ki, a spokesman for the main opposition Liberty Party Korea. “It’s time for us to be in a tit-for-tat over North Korea’s nuclear weapons.”

The conservative party, who favors hardline approaches toward the North, adopted as its party platform last week a call for redeploying US tactical nuclear weapons that were withdrawn from the peninsula in 1991. 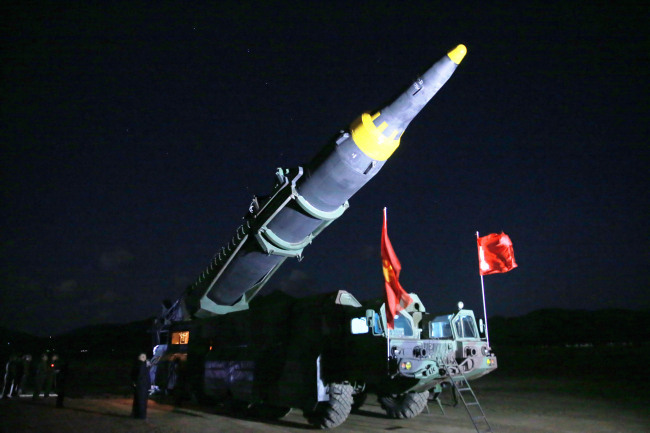 As opposed to the Liberty Party’s proposal of bringing US nuclear weapons back here, the idea calls for the US granting South Korea a right to use US nuclear assets operating outside the peninsula, such as nuclear-powered submarines or fighter jets carrying nuclear bombs, when the need arises.

“Our idea allows us to have nuclear deterrence without deploying nukes here,” while avoiding possible backlashes from neighboring countries, said Rep. Ha Tae-kyung of Bareun Party.

The need for a nuclear deterrent was echoed even from a former security advisor to President Moon Jae-in, a liberal favoring re-engagement with the North and nuclear disarmament of both Koreas.

Park Sun-won, who worked as an advisor in Moon’s camp during the past presidential election, said South Korea should redeploy the nukes to obtain minimum deterrence against North Korea’s ever-evolving military threats. Cheong Wa Dae dismissed his remarks as a “personal opinion.”

So far, the presidential office, the ruling Democratic Party and the military have stood firm on the issue, reiterating the nuclear weapons-free peninsula principle.

“I think we should stick to the principle of denuclearization,” Chairman of Joints Chief of Staff Gen. Jeong Kyeong-doo told lawmakers on Friday, referring to the 1992 Joint Declaration on Denuclearization on the Korean Peninsula, in which the two Koreas pledged to stay away from atomic weapons. 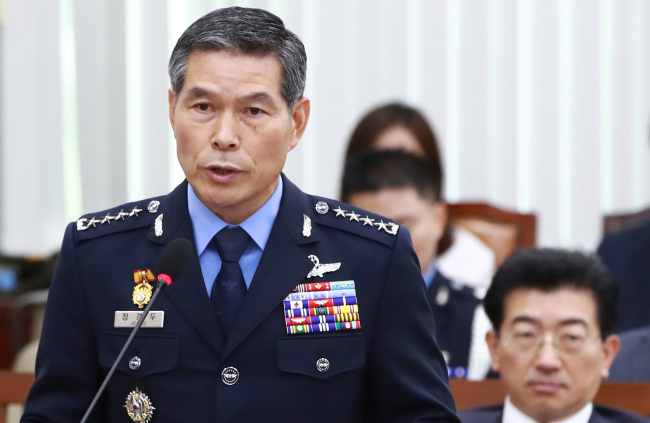 Chairman of Joints Chief of Staff Gen. Jeong Kyeong-doo. Yonhap
There had been calls for redeploying tactical nuclear weapons in South Korea in the past, mostly from far-rightists, but the issue has received renewed interest on speculation that the new US President Donald Trump may depart from Washington’s previous negative stance on it.

A New York Times report in March cited a senior White House official as saying that the administration was “considering” putting tactical nuclear weapons back in South Korea. The report was refuted, however, by US Vice President Michael Pence during his visit here April.

“For the Trump administration, North Korea has become a more urgent issue than it was during the previous administrations,” said Park Byung-gwang, a research fellow at the Institute for National Security Strategy. “They appear to consider various options -- one among them the redeployment of nuclear weapons to South Korea.” Currently, the US has 28,500 troops stationed in South Korea, along with a number of strategic assets deployed either in or near the South Korean territory.

Bringing nukes back to South Korea would be a tough call to make, full of risks not just in light of the belligerent North, but neighbors such China and Russia, analysts said.

Jeong Se-hyun, who served as the South’s Minister of Unification during the liberal Roh Moo-hyun and Kim Dae-jung administrations, asserted that if South Korea seeks to redeploy US nuclear weapons, Seoul would lose moral ground to demand North Korea abandon its nuclear ambition.

“It would be a self-contradictory move,” said Jeong in an interview last week with local media. “If we brought back the US tactical nuclear weapon, it would be like giving the North the reason to possess nuclear weapons.”

Jeong also warned that the redeployment would provoke unprecedented diplomatic backlash from China, which vehemently opposed South Korea’s stationing of the US Terminal High Altitude Area Defense system that the allies said is defensive in nature and targets North Korea.

Despite the hurdles, putting back US tactical nuclear weapons might be the only way to striking a “balance of fear” with North Korea and prevent attacks from the de-facto nuclear state, some analysts asserted.

Given that the balance of power between the two Koreas is tilting toward North Korea, with the latter‘s developing nuclear weapons and missiles to deliver them, it may be natural for South Korea to seek to bring back “stability” to the change security dynamics by going nuclear, just like the US and the Soviet Union did during the Cold War, they argued.

“Once we secure nuclear balance with deployment of tactical nuclear weapons, we can have more room to counter North Korea’s nuclear threat, building our own missile defense and pre-emptive strike systems,” said Park Hwee-rhak, political science professor at Kookmin University.

“It’s a very effective means because it changes the terms of the agreement,” said Choi Kang, vice head of the Asan Institute of Policy Studies. “We can trade our withdrawal of tactical nuclear weapons for the North’s abandonment of theirs.”