According to a USTR press release, the upcoming special session will, “consider matters affecting the operation of the KORUS Agreement, including possible amendments and modifications to resolve several problems regarding market access in Korea for US exports and, most importantly, to address the significant trade imbalance.”

Korea’s Ministry of Trade, Industry and Energy, on the other hand, said the government intends to utilize the session for both parties to further analyze facts and figures of the trade deals. 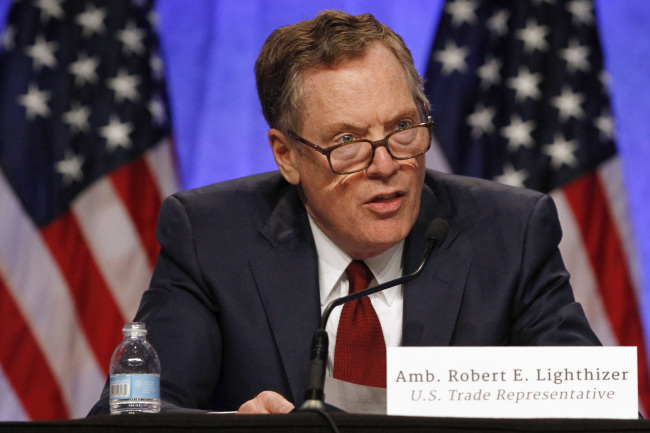 (Yonhap)
“During the meeting we will discuss the best way for us to work together in order to objectively examine, analyze and evaluate the effects of the KORUS FTA since it came into force,” the trade ministry said.

The ministry also revealed that Lighthizer will not be attending the special session. The US trade negotiator is, however, expected to open the upcoming meeting via videoconference.

USTR Chief of Staff Jamieson Greer and Michael Beeman, assistant US trade representative for Japan, Korea and APEC, are slated to attend the special session as representatives for the US.

The session of the Joint Committee comes following an official request from Lighthizer to Seoul. On July 13 (Korea time), the US Trade Representative, under the direction of US President Donald Trump, formally notified Korea that the US is calling for a committee in Washington within the next 30 days to start discussing revisions to the KORUS FTA.

Newly appointed head of Korea’s Trade Ministry Paik Un-gyu sent a letter to his US counterpart on July 25 agreeing to hold a joint committee however, countered with a different timeline, venue and agenda.

In the Seoul Metropolitan Government’s response letter, the Ministry made no mention of trade revision deliberations, the Seoul government suggested instead that the committee be used to discuss how to objectively assess the effects of the KORUS FTA. In regards to the proposed one month timeframe, Paik requested the US allow Seoul some latitude, as the new Moon administration is currently in the process of restructuring its government.

The Korean government also counter offered the US’ proposal to host the meeting in Washington and suggested Seoul as the venue for the session.

“From a Korean standpoint, having the meeting in our home ground does give us a slight advantage, however, considering both countries have new governments and new personnel, it feels like both parties are going into this session a bit unprepared,” Yang Jun-sok, an economics professor at Catholic University of Korea, told The Korea Herald. “So I don’t anticipate any major changes happening anytime soon.”

“Right now the biggest unpredictability is Trump,” Yang continued, noting that the US President’s recent controversial remarks regarding North Korea and white supremacists is adding fuel to his unpredictability. “Although the USTR has toned down its language, no longer using the terms like ‘renegotiate’ when it comes to the KORUS FTA, as president, Trump will ultimately be calling the shots.”

The joint committee meeting is expected to be a tug-of-war battle with the US likely to push its agenda to amend certain aspects of the trade deal, to which US President Donald Trump has referred to as a “horrible” and “job-killing” deal. On the other hand, President Moon Jae-in and his administration remains firm in their stance that the current terms of the KORUS FTA are mutually beneficial to both parties.

Trump, however, continues to blame the KORUS FTA for the US’ deepening $27.6 billion trade deficit. According to a report by Inside US Trade earlier this month, the USTR purportedly asked a group of industry advisers to provide opinions on how best to amend a bilateral trade pact with Korea.

The report said that the trade office requested its industry trade advisory committees for “ideas on the implementation of the agreement and issues ‘impacting fair trade’ with Korea.“