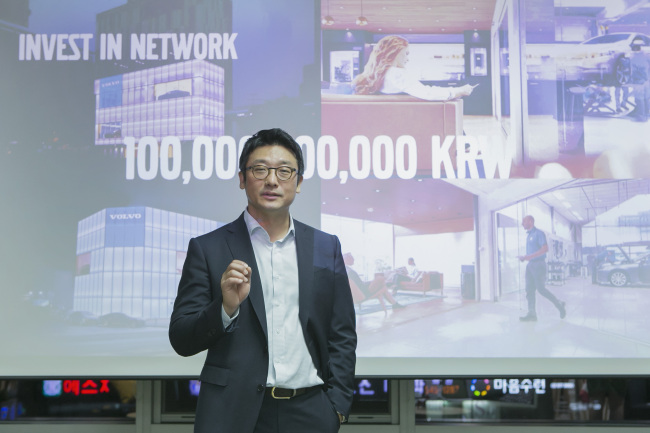 “We will invest 100 billion won this year to expand our networks, showroom and service centers. Later this year, we are going to have 22 spaces across the country, a 37.5 percent increase from last year,” said Lee Yun-mo, president of Volvo Car Korea, at an opening of its new Gangnam office. The size of the investment by Volvo is the largest since the automaker entered the market in 1997. And it is to provide quality services to the growing luxury auto market here.

Volvo is a late starter here as a foreign automaker, but it has seen quite rapid growth in the market in recent years. As of July, Volvo sold a total of 4,136 units, enough to reach its annual goal of 6,500.

More than 40 percent of Volvo fleets sold were flagship models, Lee said, referring to All New XC90, The New S90 and The New Cross Country.

“In Volvo history’s XC60 has been the most popular model and is going to be the most preferred model in the future,” he said. “Volvo celebrates the 90th anniversary this year and it seems to me that XC60 will be the ultimate achievement for the carmaker,“ he said.

The president, however, said the company will seek sustainability in its growth, rather than taking an aggressive marketing strategy, in order to keep its customer service quality level.

The carmaker‘s Personal Service Technician is system designed to maximize customers’ satisfaction, the company said. The system has one technician per customer to take care of an entire process of car fixing, instead of separating the role of advisors and technician.

South Korea is Volvo‘s 15th largest market, third in Asia after Japan. But the market has potential to grow further as Koreans prefer bigger cars than Japanese, an executive said.