[ The Korea Herald – Send E-mail ]
446 foreign scholarship students to graduate from Korean schools this month
By Yonhap
Published : Aug 16, 2017 - 16:38
Updated : Aug 16, 2017 - 16:38
A batch of 446 international students on scholarships invited by the government are set to graduate from 57 universities in South Korea this month, the Education Ministry said Wednesday.

Since 1967, South Korea has implemented an international educational program called the Global Korea Scholarship to provide about 800 foreign students a year with the opportunity to seek degrees at the countries' higher educational institutions. 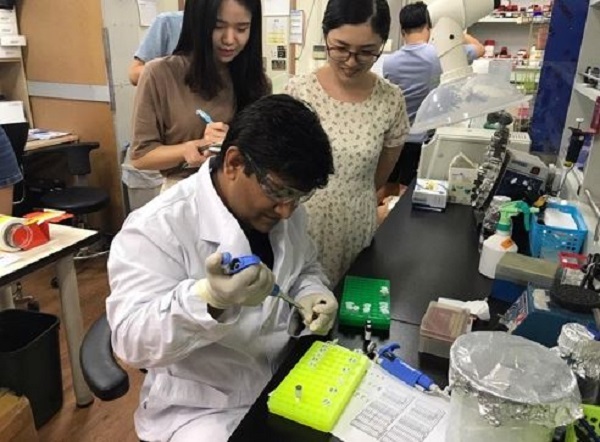 Badrul Alam (front), a Bangladeshi professor, carries out a research project at Kyungpook National University in the southeastern city of Daegu, in this undated photo released by the Education Ministry. Under a South Korea-funded scholarship program, Alam earned a doctoral degree in agriculture at the South Korean school. (Yonhap)
The program has given birth to about 3,850 graduates including former Ghanaian Employment and Social Welfare Minister Moses Aduku Asaga and Karl Muller, a mechanical engineer who developed the Masai Barefoot Technology shoe in the late 1990s.

Among this year's graduates is Badrul Alam from Bangladesh, who came to South Korea while working as a university professor and earned a doctorate in agriculture at Kyungpook National University.

Egyptian student Sofia El Khouly, who is infatuated with Korean calligraphy, received a master's degree in design from Choongang University.

Huryk Nicholas Paul, an international student from the United States and a Korean-American adoptee, acquired a master's degree in international development. The program helped him get to know his home country's culture and language better, he said.

Choi Young-han, the senior official responsible for international cooperation affairs at the ministry, expected that "the scholarship students will play a bigger role in promoting friendly relations between their home countries and South Korea as well as in developing their own countries." (Yonhap)