[ The Korea Herald – Send E-mail ]
North Korea backs off missile attack as US ups pressure on China
US-North Korea tensions show signs of winding down
By Yeo Jun-suk
Published : Aug 15, 2017 - 18:38
Updated : Aug 15, 2017 - 18:40
Tensions between the US and North Korea showed signs of winding down, with Pyongyang backing off from its threat to fire missiles toward Guam as Washington ratcheted up pressure on China to rein in its wayward ally.

After being briefed by the military about plans for missile launches, North Korean leader Kim Jong-un said he would watch the conduct of the US “a little more” before deciding whether to order the firings, Pyongyang’s state-run Korean Central News Agency reported Tuesday.

“The United States, which was the first to bring numerous strategic nuclear equipment near us, should first make the right decision and show through actions if they wish to ease tensions on the Korean Peninsula and prevent a dangerous military clash,” Kim was cited as saying by the KCNA.

“If the Yankees persist in their extremely dangerous reckless actions on the Korean Peninsula and in its vicinity, testing the self-restraint of (North Korea), the latter will make an important decision as it already declared,” the report added.

Despite their tone, the comments were seen as an indication that the regime might hold off its plan to conduct “enveloping strikes” toward Gaum by firing four intermediate range ballistic missiles around the waters near the US island. 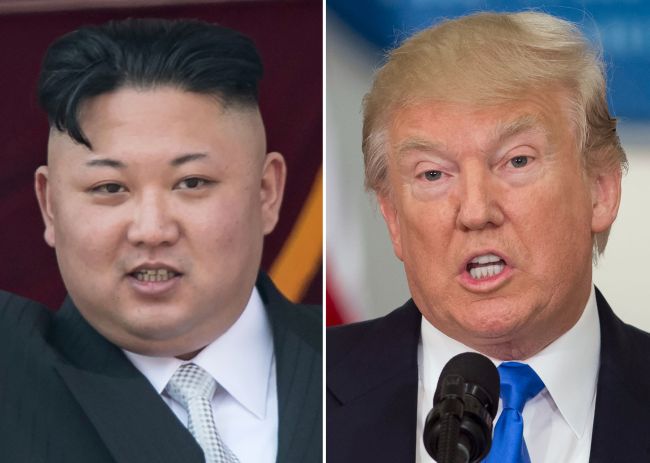 North Korea leader Kim Jong-un(left)and US President Donald Trump. Yonhap
In its latest stern warning against the North, US Defense Secretary Jim Mattis said Monday it would be “game on” for war if North Korea fired missiles that hit US territories, but refused to specify what the US would do if the missile were launched.

In what is seen as an effort to pressure China to rein in North Korea’s nuclear program, US President Donald Trump signed an executive action that asks his trade office to explore a possible investigation into China for the alleged theft of American technology and intellectual property.

Describing it as “just the beginning” of measures targeting China, Trump instructed government officials to dig into Chinese practices that force US companies to share their intellectual property in order to gain access to the world‘s second-largest economy.

“The theft of intellectual property by foreign countries costs our nation millions of jobs and billions and billions of dollars each and every year,” Trump said. “For too long, this wealth has been drained from our country while Washington has done nothing. ... But Washington will turn a blind eye no longer.”

China criticized the measure as a violation of global rules and vowed to “resolutely safeguard” its interests. The Chinese Commerce Ministry said Tuesday that Beijing would take “all appropriate measures” if Chinese companies are hurt.

The move was largely aimed to induce China to tighten pressure on North Korea. China has announced a plan to cut off imports of North Korean coal, iron ore and other goods under UN sanctions imposed over the North’s nuclear and missile programs. The ban came into effect Tuesday.

Seeking to present a united front against North Korea and its supporters, Trump on Tuesday held a telephone call with Japanese Prime Minister Shinzo Abe and agreed that the allies’ priority is how to halt North Korea’s missile launches.

“Through a firm partnership between Japan and the US and cooperating with China, Russia and the international community, we agreed that our priority was to work to ensure that North Korea doesn‘t launch more missiles,” Abe told reporter after he spoke to Trump.

A series of measures are part of the US’ effort to stress the need for diplomatic and economic means to resolve the North Korean crisis. In an op-ed in the Wall Street Journal published Sunday, US Secretary of State Rex Tillerson and Secretary of Defense Jim Mattis advocated such approaches.

The European Union’s top diplomat, Federica Mogherini, said Monday the EU would intensify its diplomatic efforts with North Korea, US and other regional stakeholders, and urged Pyongyang to refrain from any further provocative actions. 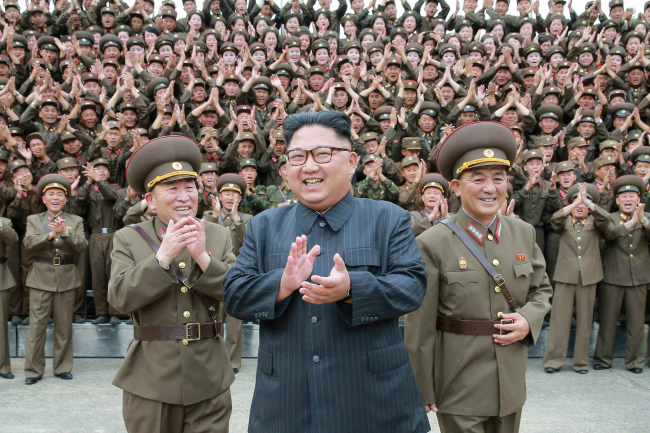 Kim Jong-un. Yonhap
Meanwhile, the speculation that Washington and Pyongyang would engage in dialogue to resolve the standoff continues to emerge, with the Japanese media reporting that North Korea’s top diplomat floated the idea of talks with the US.

Citing an unidentified government official, Yomiuri Shimbun reported that North Korean Foreign Minister Ri Yong-ho delivered his idea to his Japanese counterpart Taro Kono during their brief meeting on the sideline of the ASEAN Regional Forum on Aug. 6.

According to Josh Rogin, Washington Post columnist, North Korea had tried to send its high-level delegates to New York, but failed to do so because “conditions were not met.” The delegates were to be led by Choe Son-hui, deputy director general of the North Korean Foreign Ministry’s US affairs department.

Through a clandestine diplomatic avenue, dubbed “New York Channel,” North Korea and the US have reportedly been engaging in a series of diplomatic talks, including negotiations over the release of US prisoners held in North Korea.

US State Department official Joseph Yun and Pak Song-il, a top North Korean official at the United Nations, have been using the channel regularly since President Trump’s inauguration, according to the Associated Press.