The supply of labor in the country’s electronics industry, in particular the booming semiconductor industry, has become stagnant, raising concerns that the trend will heavily undermine global competitiveness, according to a report released by the Korea Electronics Association on Tuesday.

The report stated that the current shortage of labor means Korea’s chip industry, which is on pace for 16 percent growth this year, will struggle in the future to meet rising global demand amid the “fourth industrial revolution.”

The KEA said urgent steps must be taken to counter the shortage of manpower as Korea’s electronics industry accounts for 33 percent of the nation’s total exports. 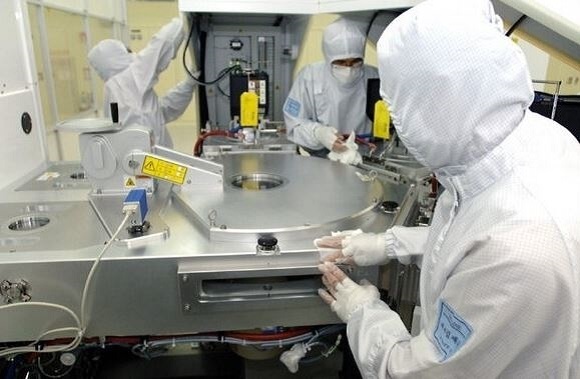 (Yonhap)
According to recent industry data, although the number of job positions in the electronics industry last year reached 53,457, the actual number of recruits by companies was only 46,429.

The number of positions that remain vacant went up 10.1 percent to 7,028 for the second half of last year. The industry as a whole currently accounts for 7.8 percent of the country’s total employment rate. The report also added that in order for companies in the electronics industry to cope with labor shortages, they have been forced to hire thousands of “unqualified” workers.

“The recruitment of unqualified workers is increasing and is impeding the immediate effectiveness of our human resources,” the report said. “Therefore, there is a higher demand for more educational and training programs for local enterprises.”

The shortage of manpower is also due to a large outflow of engineers leaving to work abroad.

Korea’s Samsung Electronics and SK hynix currently account for roughly 70 percent of the global memory chip market, but China is looking to become a major player and is expected to invest some 200 trillion won ($176 billion) into the industry. China’s Tsinghua Unigroup has pledged to become one of the world’s top five chipmakers within the next three years.

Despite the increase in overall global revenue, DRAMeXchange’s report states that chip manufacturers are still expected to have difficulty meeting growing demand in the DRAM market.

On the back of overly strong demand, investments by global chipmakers are expected to decrease next year after posting double-digit growth this year.