[ The Korea Herald – Send E-mail ]
No military action without Seoul’s consent: Moon
President says no war on peninsula; urges North Korea to freeze tests for talks
By Shin Hyon-hee
Published : Aug 15, 2017 - 11:37
Updated : Aug 15, 2017 - 18:40
President Moon Jae-in pledged Tuesday to do “all it can” to prevent war on the peninsula, saying South Korea is the only country to make a decision on any military action and the crisis must be tackled peacefully.

In his first Liberation Day address, the liberal leader called for dialogue to defuse military tensions, as Pyongyang has threatened the US island of Guam with “enveloping fire” by shooting four missiles, prompting Washington to warn military solutions are “now fully in place, locked and loaded.”

With the exchange of furious tit-for-tat threats stoking concerns over a miscalculation-led armed conflict, Moon displayed firm opposition against war, urging North Korea to freeze nuclear and missile tests as a condition for talks.

“War must never break out again on the Korean Peninsula. … Without the consent of the Republic of Korea (South Korea), no country can determine to take military action,” the president said.

“The government will do all it can to prevent a war from breaking out. No matter what twists and turns we undergo, the North Korean nuclear problem must be addressed in a peaceful manner.” 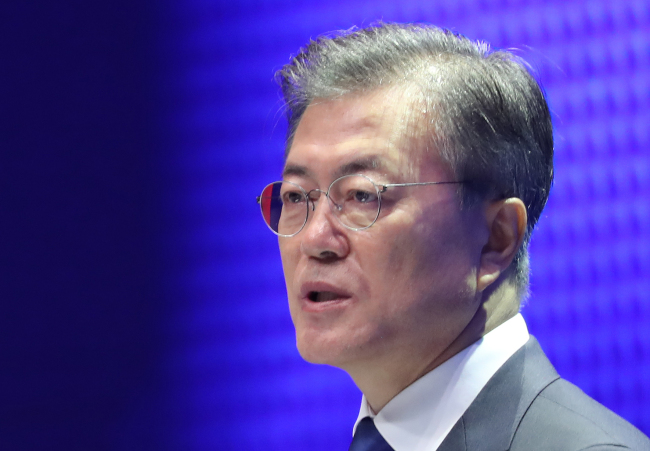 President Moon Jae-in delivers his Liberation Day speech at the Sejong Center for the Performing Arts in downtown Seoul on Tuesday. (Yonhap)
Sanctions and dialogue are not “a matter of one thing having to be done before the other,” he said, stressing the purpose of intense sanctions and pressure is to bring Pyongyang back to the negotiating table, not to heighten military tension.

History tells that breakthroughs have been made possible in the nuclear standoff when the two elements were combined, Moon noted. He pointed to the periods when the North sustained a moratorium on missile and nuclear tests and fostered cordial relations with not only the South but also the US, Japan and other neighbors.

“The resolution of the North Korean nuclear issue has to start with a nuclear freeze. When the North at least stops additional nuclear testing and missile provocations, the conditions for dialogue can be created,” the president said.

“The North has to stop provocations immediately and come forward for dialogue, thus creating a situation in which it does not have to worry about its security even without nuclear weapons.”

The speech coincides with efforts of top US foreign policy and security officials to ease the strain and tame heated rhetoric from both sides.

In an op-ed in the Wall Street Journal on Sunday, US Secretary of State Rex Tillerson and Secretary of Defense James Mattis said a “peaceful pressure campaign” remains Washington’s top priority, though it is ready for military action in contingency.

They reiterated that Washington is “willing to negotiate” with Pyongyang and has “no interest in regime change or accelerated reunification,” singling out a cessation of threats and weapons tests as a sincere indication of its good faith for talks.

Moon, who pleaded for the US to have a coolheaded and responsible response Monday, emphasized -- twice -- that his approach is in line with that of the Donald Trump administration.

“Let me make it clear: We do not want North Korea to collapse. We will neither pursue unification by absorbing the North nor seek artificial unification,” Moon said, adding any integration needs to be carried out “in a peaceful and democratic manner to which each and every Korean agrees.”

But his proposal for freeze talks faces dismal prospects given the Kim Jong-un regime’s faster-than-expected progress toward a full-fledged nuclear state capable of striking the US mainland with a nuclear-tipped missile.

The North has turned a cold shoulder to the South’s offer of military and humanitarian talks, which Moon upheld once again in the address, while directing nearly all external messages from state media at the US.

Opposition parties also churned out stringent responses to the speech.

The conservative main opposition Liberty Korea Party accused the Moon administration of “running about in confusion” despite the swirling crisis, urging the president to look squarely at the situation.

Party Chairman Hong Joon-pyo even likened the president to former British Prime Minister Neville Chamberlain who underestimated and took an appeasement approach toward Adolf Hitler, failing to forestall World War II. “You have to realize that peace is earned through strength, not begging,” he wrote on Facebook.

Rep. Park Joo-sun, interim chief of the centrist People’s Party, said Moon revealed his North Korea policy’s inconsistency, as he proposed dialogue just days after telling Trump in a phone call that now is not the time for talks. Chief party spokesperson Rep. Son Kum-ju also said Moon failed to soothe public security anxiety and provide a “concrete road map” on how to take the initiative on peninsula issues.

The view was echoed by the conservative Bareun Party. “(The speech) only highlighted the legitimacy of peace and repeated principles without detailed solutions for action,” spokesperson Jeon Ji-myeong said in a commentary, calling for a swift deployment of the US’ Terminal High Altitude Area Defense missile shield here.

Beijing, in contrast, welcomed Moon’s pledge against war in favor of a peaceful solution.

“The situation on the peninsula is highly delicate and near a tipping point where relevant parties make a determination and reopen dialogue,” Foreign Ministry spokeswoman Hua Chunying said at a news briefing. “The two Koreas should make efforts to break the stalemate and create conditions for a restart of negotiations.” 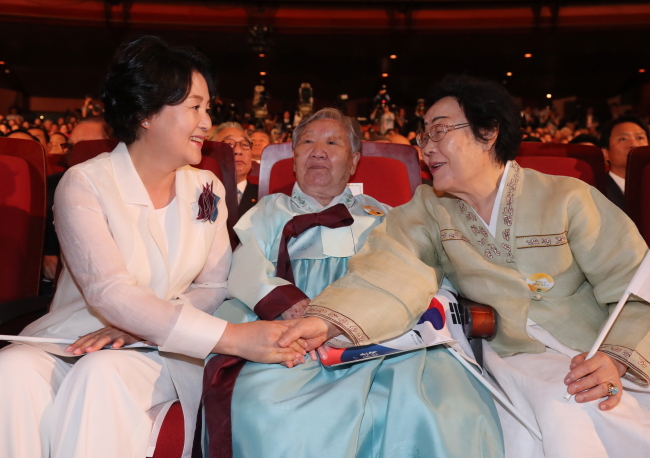 First Lady Kim Jung-sook (left) speaks with Lee Yong-soo (right) and Kil Won-ok, victims of Japan`s sex slavery during World War II, at a ceremony for the 72nd anniversary of Liberation Day in Seoul on Tuesday. (Yonhap)
The skyrocketing tension dwarfed Japan-related issues that would otherwise have been the focal point of the 30-minute address.

Yet for the first time, some victims of Japan’s sexual enslavement and forced labor during its 1910-45 colonial rule were invited to the Liberation Day ceremony along with some surviving independence fighters and their families.

Among those seated in the first row were two former euphemistically termed “comfort women” -- Kil Won-ok and Lee Yong-soo, both 89 -- as well as Lee In-woo, 93, and Choi Jang-seop, 92, who were taken to the Hashima Island undersea coal mine off Nagasaki. When Moon arrived at the venue, he embraced the two women and bowed to the two men.

On Japan ties, the president reaffirmed his two-track strategy of promoting diplomatic, economic, security and people-to-people exchanges while taking principled responses to historical and territorial issues.

With the 2015 settlement on wartime sex slavery under review, Moon underscored the need for Japanese leaders to maintain correct historical recognition and a “courageous attitude” regardless of domestic political circumstances so as to settle the historical feud.

Resolving sex slavery and forced mobilization issues should be based on international principles that consist of the restoration of the honor of the victims and compensation, the clarification of the truth and a promise to prevent any recurrence in line with the universal value of human life and a national consensus, he said.

“The obstacle to the Korea-Japan relations is not the past history itself, but the Japanese government’s inconsistent acknowledgment of the history.”

Earlier in the day, the president braved heavy rain to visit Hyochang Park in central Seoul to pay tribute to Kim Koo, the last premier of the provisional government who steered the independence movement, and the so-called three martyrs -- Yoon Bong-gil, Lee Bong-chang, and Baek Jeong-gi. Moon was the second leader to pay his respects there, following Kim Dae-jung.

“The liberation achieved by patriotic martyrs will be requited with a righteous Republic of Korea,” he wrote on a visitor’s book at the park.