Some say the market responding to North Korea risks is not new. However, what makes the difference now is that the bigger presence of foreign investors could make the market more vulnerable, as they view the North Korea factor more seriously.

The Kospi has fallen 4.26 percent since the beginning of the month. Korea’s top 10 conglomerates saw their stock values fall more than 5 percent in the past 10 days, following escalating nuclear and military tensions between North Korea and the United States. 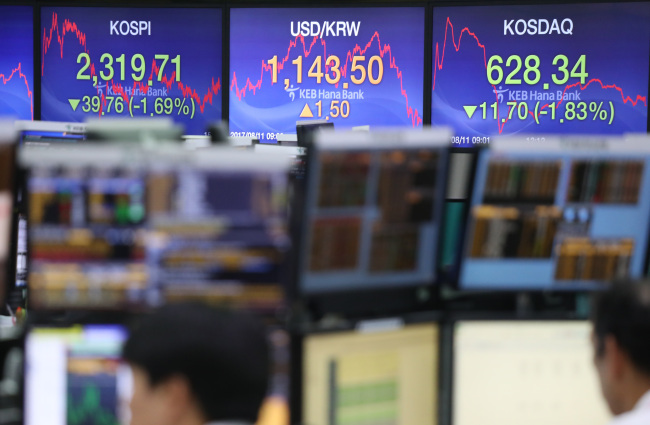 (Yonhap)
The combined market capitalization the country’s top 10 groups fell to 884.6 trillion won ($772 billion) as of Friday, recording a 5.15 percent loss compared to the beginning of the month, according to the local corporate tracker Chaebul.com on Sunday.

Tension has escalated since last week, as US President Donald Trump lashed out again North Korea, saying that the country would be met with “fire and fury” if the communist regime continued to threaten the US. North Korea threatened to fire ballistic missiles toward the US territory of Guam.

“This sort of ‘North Korea risk’ has always been a naturally occurring and cyclical factor in our country’s financial system, so really what’s happening with the stock prices falling now is nothing new,” Hong Ki-hoon, a finance professor at Hongik University, told The Korea Herald.

“It is not to say that the current slip in the Korean stock market is not a big deal, but in my opinion, rather than saying it’s a huge deal, I would say that it is to be expected because market fluctuations will always reflect North Korea’s actions,” Hong added, stating that further provocations could result in continued dips in the stock prices.

However, according to a report released by Lee Chang-sun, a senior researcher at the LG Economic Research Institute, the South Korean stock market is particularly vulnerable because of its spike in foreign investors.

The report states that as of the end of March, foreign ownership of domestic stocks and bonds accounted for $546.5 billion, a 50 percent increase from the $364.8 billion at the end of September 2007, marking the highest level of foreign ownership prior to the 2008 financial crisis.

“Although the bond market does not have a high share of foreigners, the stock market and the foreign exchange market are relatively sensitive to foreign capital deviations,” the report said.

“Recently, Korea’s potential of internal risks has always been pointed out as a factor by international credit rating agencies, investment banks and foreign investors,” Lee’s report added, noting that if the political and financial risks involving North Korea continue to deepen, foreign investors may begin to offload their shares.

Korea Electric Power Corp., which has been struggling amid the Moon administration’s shift toward more environment friendly energy pledges, is expected to suffer the most profit losses, falling from 3.57 trillion won to 3.14 trillion won.

“It is certain for third-quarter operating profits to be better than the previous quarter, but brokerage houses are starting to downgrade their predictions in the wake of tough government property policies and other measures,” Kim Dong-young, an analyst at Samsung Securities, was quoted as saying to Yonhap News Agency.

Threats by North Korea to engage its nuclear and ballistic missile programs have also led to surging gold prices, according to the Korea Exchange.

On Friday, a gram of gold was priced at 47,210 won, the highest level since April 20. The weekly price of gold jumped 3.18 percent last week, the first time since last July that the weekly increase rate has surpassed 3 percent.