The drop is reminiscent of the July 28 slide, when the Kospi plunged by 1.73 percent, the largest daily decline in over a year.

The local currency weakened by 1.5 won against the dollar in Friday session’s close. It fell by 10.1 won Wednesday and 6.8 won Thursday.

Over the past three days, safe-haven assets such as gold and yen were on the rise in tandem. Gold was being traded 50,933.3 won per gram on the Korea Gold Exchange on Friday, up 3.8 percent from Tuesday. The Japanese yen strengthened against the dollar by 0.06 yen at 3:30 p.m. It rose 0.71 yen Wednesday and 0.74 yen Thursday. 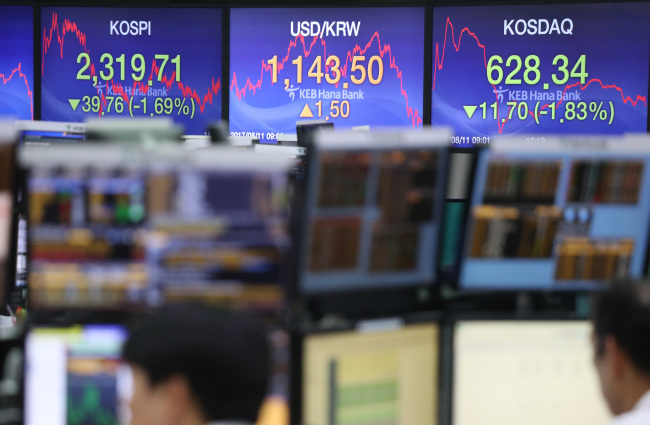 (Yonhap)
The Ministry of Strategy and Finance said in a release Friday that even a minor event could increase market volatility amid the US-North Korea row.

The ministry also said governmental bodies have vowed to make a concerted push to strengthen oversight of financial markets and the national economy, while staying “all-out on full alert” against North Korea and preparing to carry out a contingency plan.

This came a day after Bank of Korea Gov. Lee Ju-yeol told press that the North Korea threat this time would not be “short-lived.”

US President Donald Trump on Thursday issued a renewed threat to North Korea that it would face consequences that it “never thought possible” and that would make it “very, very nervous.” North Korea has threatened to attack the US territory of Guam with ballistic missiles, in response to Trump’s remark that it would be met with “fire and fury” in case of provocation.

North Korea’s seven missile tests during Moon Jae-in’s presidency so far been followed by declines in the Kospi twice: a 0.1 percent slide on May 29 after launches on May 27 and May 29, and a 0.58 percent drop on July 4 after a launch in the morning. South Korea’s stock markets have remained unharmed even upon the other missile launches, including one on July 28, minutes before midnight. On the following trading day of July 31, the Kospi edged up 0.07 percent.

Setting the North Korea issue aside, foreign investors’ increasing appetite for reaping profits was already at the maximum level, accelerating the cash outflow, according to analysts.

Samsung Electronics’ ordinary shares and preferred shares saw 1.64 trillion won of offshore net sales, while the investors net sold 550 billion won worth of SK hynix shares. In total, they accounted for 87.6 percent of the entire net sales of 2.7 trillion won over the cited period.

“Foreign investors are seeking a position change, where they sell momentum and buy inflation,” Park wrote.

Ko Gyeong-beom, an analyst at Yuanta Securities, cited the ratio of the Kospi to the won-dollar exchange rate -- measuring the Kospi in foreigners’ perspectives by reflecting the currency exchange -- as having hovered above 2 for three months, while approaching a record-high in November 2007.

“Long exposed to the IT sector’s growth momentum in South Korea, foreign investors may turn to sell-offs,” Ko wrote.