BUSAN -- A Japanese man donated a photo of a Korean victim of Japan’s wartime sex slavery to a local museum on Tuesday as an apology for what he said is an act against humanity.

Jikai Taketomi, an official from a private war archive in Japan, offered some 30 photos, letters and other articles from World War II to the state-run National Memorial Museum of Forced Mobilization under Japanese Occupation in Busan. 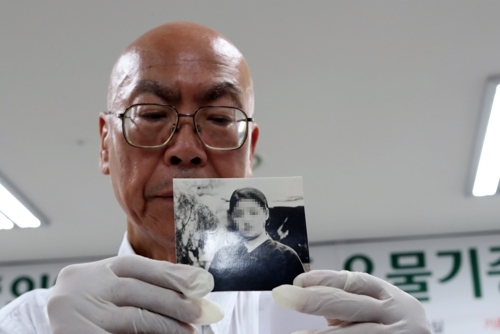 Jikai Taketomi, vice head of the War Archives on Soldiers and Ordinary People in the southwestern Japanese prefecture of Fukuoka, shows a photo of a Korean woman victimized by Japan's wartime sexual slavery during a ceremony at the National Memorial Museum of Forced Mobilization under Japanese Occupation in the largest port city of Busan on Tuesday. (Yonhap)
They include an original photo of a Korean woman who worked at a military brothel.

Taketomi said it was possessed by a fellow solder of his father stationed in Myanmar. She hailed from the southeastern Korean city and it is not known how his father’s friend got the photo, he added.

Taketomi is vice head of the War Archives on Soldiers and Ordinary People in the southwestern Japanese prefecture of Fukuoka.

The Busan museum withheld the figure’s name and did not make the photo public, saying the revelation of her identity could encroach on her human rights. It is unknown whether she is still alive, it added.

Taketomi also said he is administering the will of the soldier who asked his father to relay his apology to the woman for his wrongdoings.

On behalf of his father, Taketomi also took an opportunity to atone for Japan’s war crimes. “I would like to offer my sincere apology for (Japan’s) inhuman acts in the name of war,” he said.

“Those who turn away from the past cannot see the present, and those who fail to reflect on the past could fall into another risk.”

After attending a ceremony marking the donation, Taketomi offered his apology once again in front of a statue of a girl symbolizing the victims of Japan’s wartime sexual slavery near the Japanese Consulate in South Korea’s largest port city of Busan. (Yonhap)