The communist state came to Manila for the ASEAN Regional Forum amid a torrent of international criticism over recent tests of intercontinental ballistic missiles which prompted the UN Security Council to adopt a fresh set of crippling sanctions Saturday. 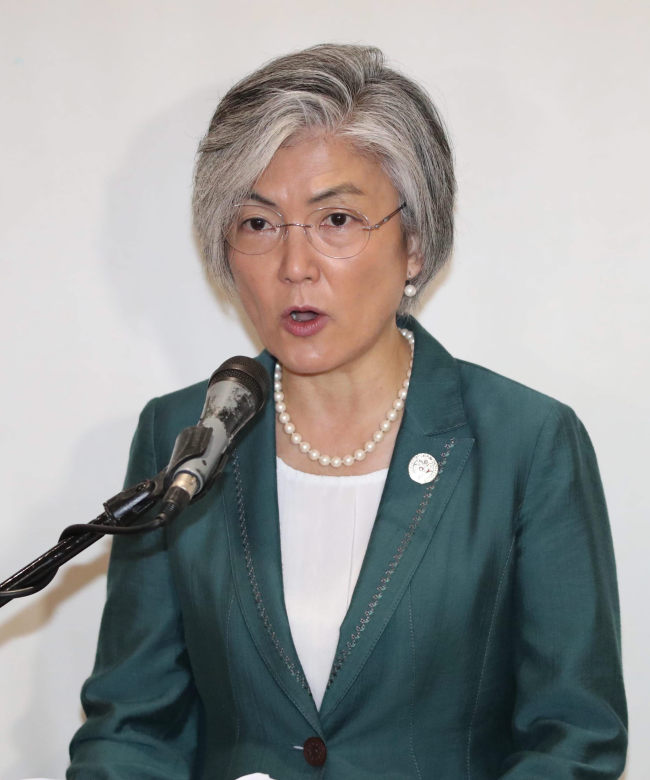 Kang Kyung-wha (Yonhap)
Yet North Korean Foreign Minister Ri Yong-ho proclaimed at the conference on Monday that North Korea is a “responsible nuclear power and ICBM state,” blaming the United States’ “hostile policy” for its nuclear and missile development which would not be subject to negotiations.

“(The ARF) was a venue where North Korea could keenly feel how isolated its diplomatic position is. It had faced very difficult circumstances, an even more isolated situation at the very start of the forum due to Resolution 2371 and its hardline government statement afterward,” Kang said at a news conference.

“I’ve come to think that the North is really diplomatically isolated, and hope it realizes its isolation would only deepen further with such a reaction to the UNSC action.”

With many of the 27 member countries refusing Pyongyang’s request for bilateral meetings, the Philippines’ Secretary of Foreign Affairs Alan Peter Cayetano met with Ri to convey a “strong message,” Kang noted.

The 10 ministers from the Association of Southeast Asian Nations issued a rare standalone statement on North Korea on Saturday, saying its provocations “seriously threaten peace, security and stability in the region and the world” and urging the North’s “full compliance” with UNSC resolutions.

The sentiment is expected to be reflected in a chairman’s statement to be unveiled as early as later in the day. Negotiations are under way but could be drawn out due to disagreement on the language over the South China Sea issues, a Seoul diplomat told The Korea Herald.

During talks on Monday with US Secretary of State Rex Tillerson and Japanese Foreign Minister Taro Kono, the three countries agreed to work together to deter a potential North Korean provocation, which may coincide with a South Korea-US joint military drill later this month, and to formulate a “joint roadmap” for the denuclearization of the peninsula, Kang said.

Yet she stressed that she made clear that despite sustained sanctions and pressure, the door for dialogue remains open in line with President Moon Jae-in’s Berlin initiative. The message was also delivered to Ri during their three-minute encounter Sunday.

“We could not exchange in-depth conversations as there were other people around and due to the overall atmosphere, … but my message was to urge a proactive response to our proposal for military and humanitarian talks,” Kang said.

“He spoke in a very serious and slow manner, and I felt even as he was talking he had lots of thoughts behind.”

With China steadfastly taking issue with the United States’ deployment of the Terminal High Altitude Area Defense missile shield in South Korea, the minister likened Beijing’s position to “putting the cart before the horse,” indicating without North Korean threats, the system would not be necessary.

“The essence of this problem lies with North Korean provocations, and we took a step to protect our people and address security threats escalated by the North’s two ICBM tests, based on our national interests and defense needs,” she said.