MANILA, Philippines -- North Korean Foreign Minister Ri Yong-ho on Monday declared the country would not have any negotiations on its nuclear and missile programs unless the US “fundamentally” deserts what it calls hostile policy.

At the ASEAN Regional Forum in Manila, he sought to claim the legitimacy of the country’s weapons program, which he said resulted from Washington’s decades-old “nuclear blackmail” and hostile policy involving large-scale military exercises with Seoul and strategic assets. Pang Kwang-hyok, deputy director-general of the North Korean Foreign Ministry’s international organization bureau who was serving as the delegation’s spokesperson, released the text of Ri’s speech after the session.

With the nuclear weapons being an “inevitable strategic option” that can “neither be reversed nor bartered for anything,” leader Kim Jong-un meant to send a “stern warning” to the US through the recent tests of intercontinental ballistic missiles, Ri said.

“No other country in this world than the DPRK (North Korea) has been exposed to the nuclear threat of the US for such a long time so directly with such intensity,” Ri said in the address.

“We will, under no circumstances, put the nukes and ballistic rockets on (the) negotiating table. Neither shall we flinch even an inch from the road to bolstering up the nuclear forces chosen by ourselves, unless the hostile policy and nuclear threat of the US against the DPRK are fundamentally eliminated.” 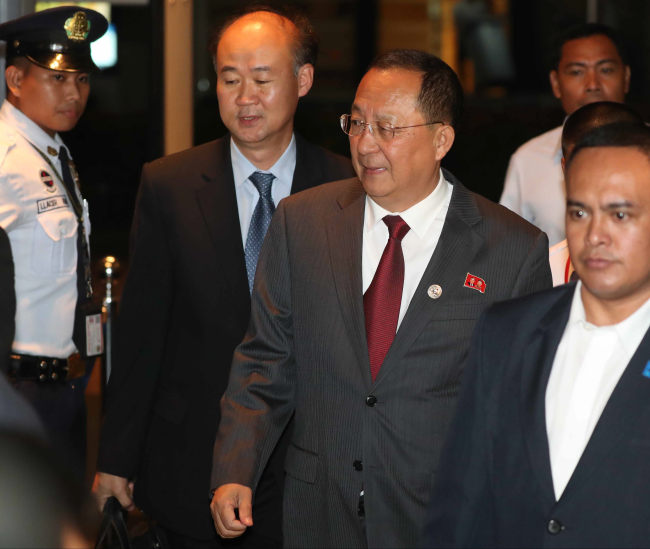 North Korean Foreign Minister Ri Yong-ho (second from right) arrives at a hotel in Manila on Monday. (Yonhap)
The remarks were in stark contrast to those made hours earlier by US Secretary of State Rex Tillerson, who said Washington would consider talks if Pyongyang halts its missile tests.

“The best signal that North Korea could send that they’re prepared to talk would be to stop these missile launches,” the secretary told reporters, though he declined to give a specific time frame on how long the North would need to refrain.

“We’ll know it when we see it. … This is really about the spirit of these talks. And they can demonstrate that they are ready to sit in the spirit of finding their way forward in these talks by no longer conducting these missile tests.”

The North is a “responsible nuclear power and ICBM state,” Ri argued, saying it does not intend to use the weapons against any other country but the US, unless other countries join military action against his homeland.

Ri lambasted the latest UN Security Council resolution as an “illegal act of abusing the authority,” threatening to take “strong follow-up measures and acts of justice” against the US, the chief author.

“The DPRK which relies on self-reliance and self-development as its mode of existence can fully counter the hostile policy and acts of the US,” he said. “Should the US pounce upon the DPRK with military force at last, the DPRK is ready to teach the US a severe lesson with its nuclear strategic force it has so far shown in detail.”