The two ministers managed to shake hands and shared a brief conversation ahead of a gala dinner Sunday for top delegates of the ASEAN Regional Forum in Manila, Seoul officials said. 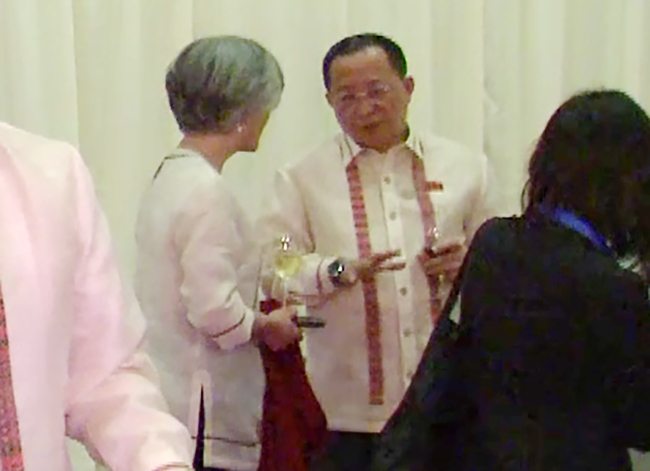 South Korean Foreign Minister Kang Kyung-wha (left) speaks with her North Korean counterpart Ri Yong-ho ahead of a gala dinner for top delegates of the ASEAN Regional Forum in Manila on Sunday. (Yonhap)
Kang mentioned the North’s silence toward the South’s proposal of military and humanitarian talks, saying she was “looking forward to a swift response.”

After momentarily holding back, Ri said that sincerity is missing in the proposal, with Seoul and Washington carrying out a joint pressure campaign. Kang refuted his argument, highlighting the Moon Jae-in government’s resolve for the initiative and once again urging Pyongyang’s positive answer.

“(Ri) said that the move could not have sincerity, given the situation where we’re intensifying sanctions and pressure through the UN Security Council and cooperation with the US,” Kang told reporters.

“So I said the talks concern an issue that is urgent and ought to be addressed before any other political matters, and I hope the North will actively and positively respond.”

ASEAN (Yonhap)
Ri’s portrayal of the proposal underscored the Kim Jong-un regime’s aloofness toward inter-Korean engagement as the North inches closer toward becoming a full-fledged nuclear state in the wake of two successful tests of intercontinental ballistic missiles last month.

Ri appeared to be also referring to a new UNSC resolution adopted a day earlier, designed to slash the isolated country’s annual export earnings by about a third, or $1 billion, with a trade ban on coal, fisheries, labor and other goods and services.

The remarks coincided with a report by Pyongyang’s state media Monday that said it “completely rejects” the resolution as a “violation of our sovereignty,” threatening to retaliate against the US “100, 1,000 times” through an “act of justice.”

On Monday, the two top diplomats attended the ARF, where the representatives of 27 member nations engaged in heated debate over the language of a chairman’s statement to be unveiled at the end of the event.

On the forum’s sidelines, Kang hosted a three-way luncheon meeting with US Secretary of State Rex Tillerson and Japanese Foreign Minister Taro Kono, while speaking one on one with Kono and her Russian counterpart Sergey Lavrov in separate sessions.

Ri, for his part, held talks with Lavrov and the Philippines’ Secretary of Foreign Affairs Alan Peter Cayetano.

During a one-hour trilateral luncheon, the ministers reviewed the latest sanctions and explored ways to better enforce them, such as through collaboration with China and Russia, Seoul’s Foreign Ministry said.

They concurred that it is helpful to continue strengthening sanctions and pressure for a change in the regime’s attitude so as to lay the groundwork for “serious denuclearization dialogue.”

“The resolution is one that was passed unanimously thanks to cooperation from not only the US but also China and Russia,” Kang said.

“It is an obligation for not only UNSC countries but all UN member states. The member states must implement the resolution themselves even without us putting pressure for it.”

Tillerson, who also separately met with Wang and Lavrov, said Washington would consider talks if Pyongyang halts its missile tests, while refusing to give a specific time frame on how long it might need to refrain.

“The best signal that North Korea could send that they’re prepared to talk would be to stop these missile launches,” the secretary told reporters.

“We‘ll know it when we see it. … This is really about the spirit of these talks. And they can demonstrate that they are ready to sit in the spirit of finding their way forward in these talks by no longer conducting these missile tests.”

With Lavrov, Kang lauded the resolution as a “landmark feat” in making concerted efforts to respond to the North’s nuclear program, requesting Moscow to play a “constructive role.”

“Lavrov emphasized that under the firm principle that it will not accept North Korea’s nuclear weapons, Russia will closely work with South Korea for a joint international goal of achieving denuclearization in a peaceful manner,” Seoul’s Foreign Ministry said in a statement.