During the April-June period, 19.95 million barrels of gasoline were consumed, up 3.6 percent from a year earlier, according to the data released by the Ministry of Trade, Industry and Energy. 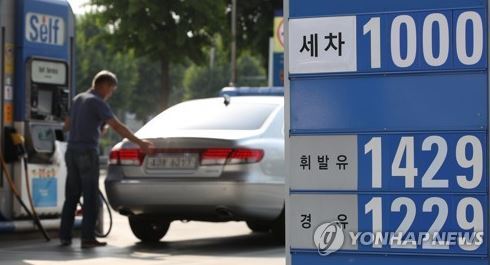 (Yonhap)
The latest numbers for both fuels marked the highest quarterly consumption among all second quarter data.

The ministry said a drop in prices of gasoline and diesel at the pump led to increased traffic on the road.

Meanwhile, South Korea imported 264.5 million barrels of crude oil in the second quarter, down 0.7 percent from a year earlier. The dip was caused by scheduled repair and maintenance at local refineries.

Some 2.6 million barrels of US crude were imported over the same period, up from none tallied a year ago, as the Seoul government is actively moving to decrease its trade surplus with the world's largest economy. (Yonhap)