Wang spoke to reporters in Manila after meeting with North Korean Foreign Minister Ri Yong-ho on the sidelines of a regional meeting, hours after the UN Security Council unanimously approved tough new sanctions to punish Pyongyang for its escalating nuclear and missile programs. 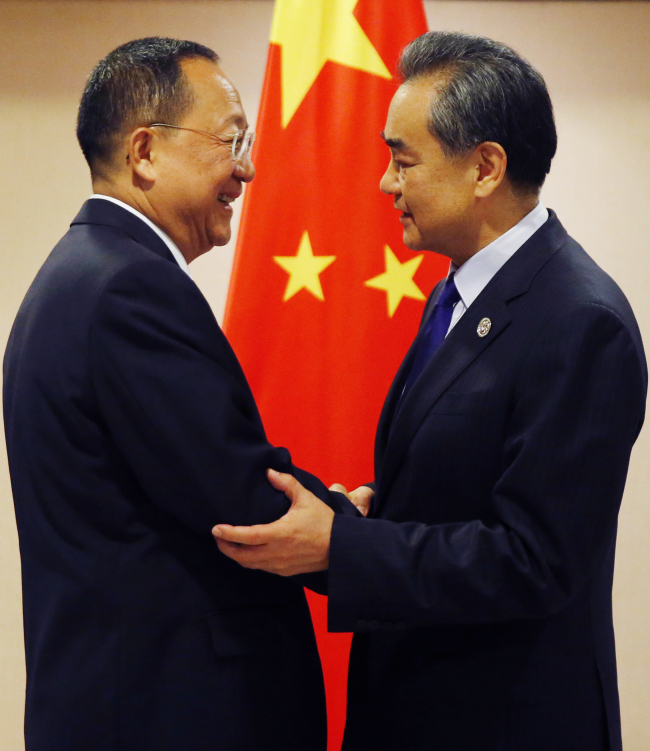 North Korean Foreign Minister Ri Yong Ho, left, is greeted by his Chinese counterpart Wang Yi prior to their bilateral meeting in the sidelines of the 50th ASEAN Foreign Ministers' Meeting and its Dialogue Partners. (AP-Yonhap)
Wang said the two had an intensive conversation during which China urged North Korea to maintain calm. He said he told Ri “do not violate the UN decision or provoke the international community's goodwill by conducting missile launches or nuclear tests.”

Wang also urged the US and South Korea “to stop increasing tensions” and said that all sides should return to negotiations.

In an earlier statement Sunday, Wang Yi appealed to other governments to resume the six-nation talks that involve the North, the United States, Russia, Japan and South Korea, as well as Beijing. 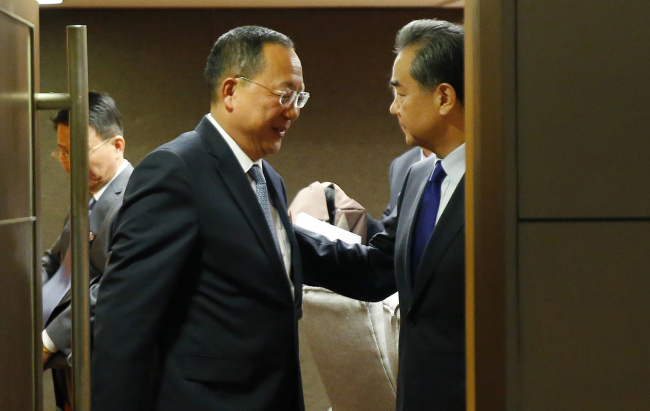 (AP-Yonhap)
North Korea pulled out of the talks in 2009 to protest international condemnation of a long-range rocket launch. Last month, it test-launched two intercontinental ballistic missiles capable of reaching the US mainland.

US Secretary of State Rex Tillerson has said Washington wants eventually to talk to North Korea, but thinks discussions would not be productive if Pyongyang comes with the intention of maintaining its nuclear weapons.

Wang's statement repeated Beijing's proposal for a “double suspension,” or a halt to North Korean nuclear development and to joint US-South Korean military exercises. It said that was the most reasonable way to ease tensions and create conditions for new talks. (AP)