Starting January 2018, a broader scope of offshore investors are subject to taxation, since the proposal by the government aims to widen the definition of “major shareholders,” referring to those who hold more than 25 percent of shares currently, to those with stakes of over 5 percent. 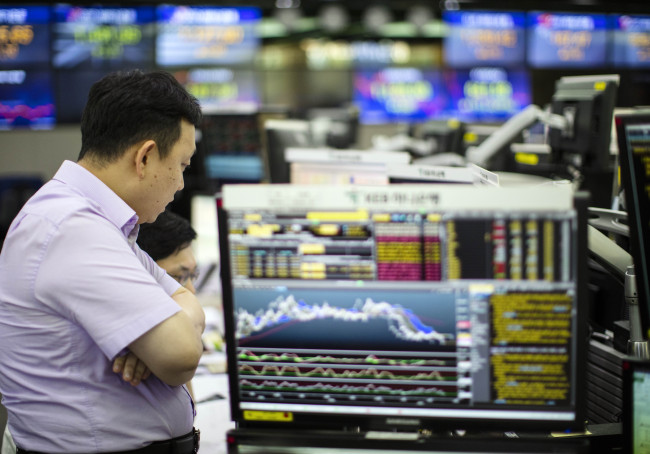 (Yonhap)
But many foreign investors would experience a minimal impact from the move and be able to avoid double taxation, Kim Seo-yeon, an analyst at Korea Investment & Securities wrote Friday.

“We believe most foreign companies would not be affected by the changes,” Kim wrote, “Under the proposed revisions, investors subject to taxation would be from countries without tax treaties with Korea.”

Lee Eun-taek, a strategist at KB Securities, also wrote Friday that the impact on foreign investors from the tax revision plan would be short-lived, citing “very few foreign individual shareholders excluding those in refiner S-Oil have more than 5 percent of shares.”

“The major shareholders of small and mid-cap stocks may sell stocks to avoid taxation,” Lee wrote. “(The revision) provides little reason for a massive foreign sell-off in Kospi market.”

Korea government’s Wednesday decision to slap heavier taxes for capital gains on foreigners and high-income earners, coupled with ongoing geopolitical tension, has also made the case for a downward adjustment in the stock market, Jeon Sang-yong, an analyst at Taurus Investment & Securities wrote in a note Friday.

“Now that Korea is almost at the end of the second-quarter earnings period, the market will have to adjust to the impact of earnings shocks,” Jeon wrote. “But this will not undermine market fundamentals.”

He added the Wednesday announcement including plans for a corporate tax hike would trigger a “game of Whac-a-Mole” in Korea’s stock market, since the move is the opposite direction from global trend of easing corporate taxes.

The Kospi plunged below the 2,400 mark in Thursday closing, marking a 1.68 percent fall which was the second-largest since the 1.73 percent drop on July 28. The 0.36 percent recovery on the following day stopped short of Kospi‘s return to above-2,400 territory.

Over the past 10 trading days, foreign investors net sold off 2.56 trillion won worth of stocks. Except for Wednesday, foreigners showed selling trends on nine days out of the cited 10 days in the Kospi market.

Analysts projected the index to move between 2,360 at the lowest and 2,430 at the highest in the upcoming week.