According to the electronics industry on Sunday, Samsung Electronics and LG Electronics are both preparing lineups of premium products that are equipped with future technologies, including Internet of Things and artificial intelligence, to attract European buyers at the Internationale Funkausstellung Berlin -- known as IFA -- scheduled to be held on Sept. 1-6.

One of the oldest industrial exhibitions in the world, the IFA is held annually in the German capital, attracting more than 1,800 exhibitors from all around the world.

For Korean electronics makers -- 96 companies attended the event last year -- the show is a gateway to the European market, one of competitive premium markets in the world.

Samsung is expected to exhibit the firm’s largest-ever 88-inch quantum dot light-emitting diode television at its booth for the first time since it announced the launch of the size last Wednesday.

According to Jens Heithecker, the IFA’s executive director, Samsung would have the largest booth space at the event as it did for the past several years.

On Aug. 30, two days ahead of the IFA opening, the world’s top smartphone provider will also unveil its newest smart watch, Galaxy Gear S4, capturing global attention. Fans of wearable devices have high expectations on the release of the new smart watch which is rumored to have a wireless charging function and some AI-based Bixby services.

Samsung is expected to display a lineup of consumer audio products made by US Harman International at the European trade show for the first time, since it completed acquisition of the American manufacturer in March.

“Both Samsung and LG are highly likely to use the IFA event as an opportunity to strengthen their premium images,” an industry official said. “The premium TV will be at the center of each company‘s premium strategy, including some new products curtailed for European consumers.” 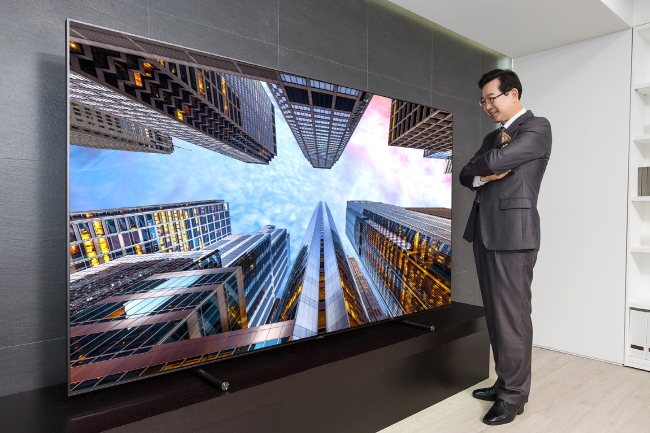 A consumer takes a look at an 88-inch QLED TV displayed at an outlet in Siheung, Gyeonggi Province. (Samsung Electronics)
Meanwhile, the IFA event may be more important for LG that is set to launch the company’s new premium smartphone V30 on Aug. 31 in Berlin. It is the first time that LG decides to debut its strategic flagship smartphone at the Berlin show.

After posting around a 130 billion won operating deficit in the second quarter due to low sales of the flagship G6 smartphone, LG is making a second attempt to restore the mobile business.

LG is planning to enhance its leadership in the premium home appliance market with the SIGNATURE brand featuring the world’s thinnest organic light-emitting diode TV, known as the LG OLED TV W.

LG is focusing on Europe, the world’s biggest OLED TV market where the company sold about 40 percent of its OLED TV products last year.