[ The Korea Herald – Send E-mail ]
Koreans traveling to China plunge amid THAAD row: data
By Catherine Chung
Published : Aug 6, 2017 - 11:33
Updated : Aug 6, 2017 - 11:33
The number of South Koreans traveling to China plunged from April through June of this year amid the diplomatic row over Seoul's decision to deploy US anti-missile defense systems on its soil, tourism industry data showed Sunday.

The total visitors going to China fell by 50 to 60 percent in the quarter compared with the year before, which roughly coincides with Beijing ordering its travel agencies to stop selling group tours to South Korea in mid-March, Hana Tour and Mode Tour said. 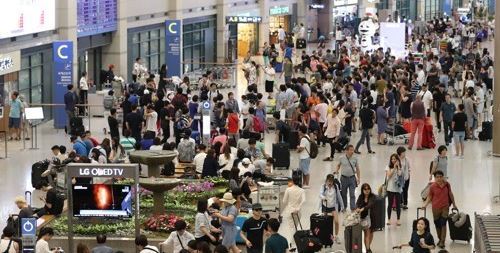 This file photo shows the arrival area at Incheon International Airport, South Korea`s main gateway to the world. (Yonhap)
China has also imposed economic sanctions on South Korean-made products and there has been a campaign to boycott products that have affected sales of cosmetics, consumer electronics and autos.

Beijing has strenuously opposed the deployment of the Terminal High Altitude Area Defense system, claiming it hurts its security interests. Seoul has countered that the THAAD defense system is needed to counter evolving threats from North Korea's missile and nuclear capabilities.

Hana, the country's leading travel agency, said the number of South Korean tourists that booked trips to China was down 61.2 percent in the three-month period. This is in direct contrast to the 11.8 percent increase reported for the first quarter of this year.

Hana said that people who probably would have gone to China have opted to take trips to Japan and Southeast Asia instead.

South Koreans going to Japan surged 106 percent in the three-month period, while those taking trips to Southeast Asia rose 63.7 percent.

"The drop for China is significant since people going to other parts of the world all rose," the company said.

It said there was a triple-digit increase for South Koreans going to Japan, while numbers for Europe and Southeast Asia jumped more than 50 percent. Visitors going to the Americas rose 18 percent in the second quarter on the year.

Such shifts, meanwhile, were reflected in passenger numbers on international flights.

Flights connecting South Korea to China contracted 22.5 percent in March of this year, vis-a-vis the same month in 2016. Numbers for April were down 47 percent, with minus 45.6 percent and 44.9 percent tallied for May and June, respectively.

Industry data showed that international flights to China that accounted for 30.3 percent of all routes in June 2016 stood at just 16.7 last June. In contrast, flights to Southeast Asia and Japan all rose in the corresponding period to 37.9 percent and 24.3 percent from 32.5 percent and 18 percent, respectively.

Industry data showed that from March through June, the number of Chinese tourists, commonly known as "youkers," nosedived around 60 percent to some 1.09 million from well over 2.74 million in the same period last year.

"Up until last year, China was the destination of choice for South Koreans wanting to travel abroad, but with the THAAD row and concerns about anti-South Korean sentiment, people here are switching to other countries," a Hana Tour source said.

Related to the drop in youker visits, the Bank of Korea said earning by local tourism businesses fell to the lowest level in six year in the second quarter.

The central bank said in the three-month period, earnings reached US$2.94 billion, the lowest since $2.67 billion reported for the April-June period of 2011. This is even smaller than the $3.19 billion in the third quarter of 2015, when the country was struggling to contain the Middle East Respiratory Syndrome outbreak that scared away visitors. (Yonhap)